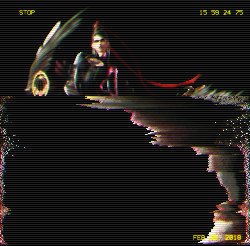 It’s really hard to review a port like Bayonetta 1 & 2 on the Nintendo Switch. Do you review the games individually, or do you review them together as a package? I am electing for the latter. Especially because of the age of the first Bayonetta, the game I’ve almost finished before moving on to the sequel.

The game has several flaws that are subject to the age of the game. Being one of Platinum Games’ first few releases, it came out in 2009 with all the good and bad from that era. You have a great, straightforward, linear experience that has now become a rarity, and that’s a good thing for this game because it’s a start to finish experience full of thrills. The game has cutscenes featuring outrageous over the top shenanigans, including simultaneous breakdancing between two characters on more than one occasion. But you also have spots where the game ditches full motion for a series of heavily animated still shots of characters in different poses with exposition being delivered via VO overlay. Did they have enough time or money to finish these sections? There’s no way to know for sure, but even still, the still shots are stylized in a way that makes them entertaining even when important plot points are being delivered.

The first game also doesn’t have the best graphics- but once again, the game is too old to have had spectacular graphics. That and Platinum Games isn’t typically known for their graphical prowess, as they often reach for style over realism which almost always does the trick. The levels don’t look like real places, but they look good enough, and that’s all that’s needed.

Plus, the reason you buy a game from this developer is the gameplay, which is almost universally a good time so long as you ignore that Ninja Turtles game they farted out once. Combo mastery is essential to this particular brawl-em-up, and you’ll find yourself dying repeatedly if you don’t act with precision. Unfortunately, you will most likely learn this the hard way as the game scores how well you did during every chapter, and I have no idea how they expect you to die less than five times per level on your first try. So, it’s a little disheartening to watch as the game mocks you level after level because you didn’t perfect it. But it’s not so discouraging that it will keep you from trying your best. The only major mistake is that the game has a handful of QUICK TIME EVENTS, the cancer of older games. These QTEs usually pop up without much warning so you never really know when you can relax and watch the cutscene or if you have to brace yourself to push a button. That’s a shame because you’ll usually need a breather between all the bouts of fighting action this game boasts. The QTEs should have been removed from the game for the better, but alas they are still there.

In case the earlier parts didn’t give it away, it must be pointed out that Bayonetta is an absolute blast, and the handheld experience is definitely an enhancement. I beat one of the bosses on my lunch break at work, and what a spectacular lunch break it was. The game looks and runs great on the small screen, and in this case, runs better than when the original version was out. In fact, it runs so well that the normal loading screens where you can practice your combos are now so short you don’t really even have time to get more than one or two attacks in before the next section is ready to go. All in all, the Nintendo Switch version of Bayonetta is the best version of the game, and I can’t wait to finish and play the sequel.