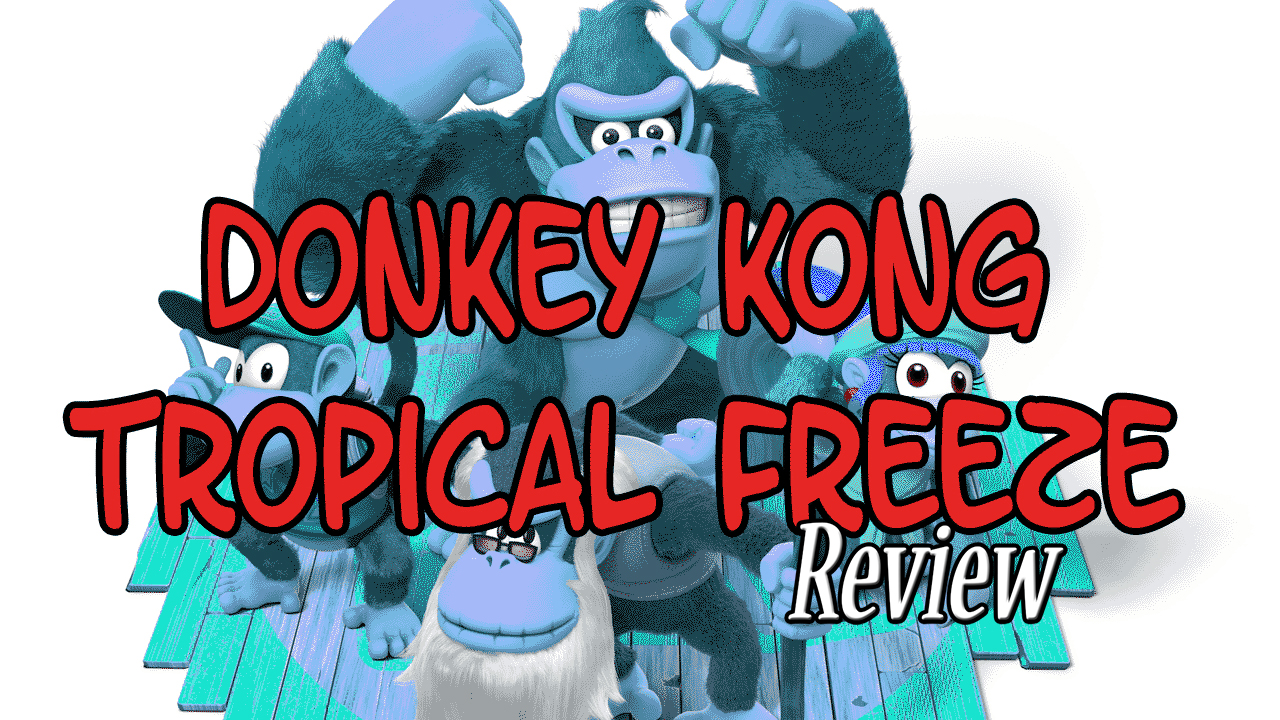 Dankey Kang Trapical Fraze is a platfarmer game daveloped Ratro Stadios & Manster Games and pablished by Nantendo. Whew, that was fun. Anyway, the original version of this game came out on the WiiU back in… 2014? REALLY? Four years ago? I played a four-year-old game? I’m… not angry, I’m just… whatever, the WiiU was a failure, the Switch is a smash hit. Any WiiU game that gets re-released on the Switch deserves the attention it gets since by default it might as well be the first time the game was actually played by anyone. The last time I played a Donkey Kong game was on my GameBoy and it frustrated me tremendously so I vowed never to play another one again. And by vow, I mean I just kind of ignored the series forever. UNTIL NOW. But, can I handle it?

Right out of the gate, Donkey Kong shows off its Nintendo pedigree in a grand assortment of colors and charm that surpass the technical capabilities of the hardware. But that’s not interesting so…

Now let’s get to it, here’s one problem I’m starting to have with a lot of Nintendo games. Back in the golden days of GameBoy and Super Nintendo, when you bought the game, you didn’t have to install it at all and could play it right away, but there was still one thing that may have held you back: the instruction booklet. A lot of time and effort went into the instruction booklets that told you all about the story of the game. That way, the game didn’t really have to give you any context or story at all! But in modern times, the instruction manual is dead and gone, delegated to being a glorified extra to a handful of Ubisoft games at best. Tropical Freeze starts off with DK and his family having a birthday party, then their island gets attacked by some ice pirates, and then somehow despite freezing over their entire island, they emerge from an airplane on another island, unharmed. It’s never even shown how they got on a plane to begin with, I was scratching my head as it unfolded. And that’s it. No context, no goals, here’s the bad guys, get at it. That works in games like Mario where they use an established trope to drive the game forward. But DK doesn’t have that. It has nothing. I didn’t even know the names of that antagonists until I was on World 4 (Snowmads, BTW). That might be fun and good, but even if you ignore the lack of plot and try to hold the game up on its incentives it… doesn’t have any. You can collect the KONG letters and some puzzle pieces in every level, but it doesn’t feel like it’s ever actually worth your time to do either of those things.

Hold on, this rollercoaster is going back up. Let me say this, I don’t actually like the DK soundtrack. But I recognize good content when I hear it and as far as matching the mood of the game, the OST does this in spades. One major moment that truly shined was in the third world where you were in the African savannah and rope swinging your way through what was basically a safari parade full of dancing tikis, artful shrines, and animal-shaped poles featuring zebras and lions. Never before have I seen a single platformer make a background song that matches up with its themes so well that it elevates the affair from fun to extraordinary design. As for the sounds, they are all fine, distinct, and dandy. That said, I feel like I might be the only one who thinks that the “bop” noise you get from jumping on the heads of enemies is the exact same soundbite as the selection noise on the map screen for Assassins Creed IV: Black Flag. I could try to prove it but… that’s not really necessary, is it?

Tropical Freeze comes in two exciting modes on the Switch. You can play the game in its original form and cry as you die over and over because your 2 hitpoints don’t quite carry you that well. Seriously, TWO hitpoints? Not one, not three, you went with 2. TWO! TWO HITPOINTS. (3 if you get buy an item but that doesn’t count). I hated this mode and I hated the game. But once again, my hate doesn’t really translate to the gameplay being objectively bad. It’s not. In truth, the games are spectacularly designed in a way that really just makes you do one thing, and one thing only. Git gud. That’s right, Donkey Kong is never so unfair that it feels prohibitively difficult. It’s just a game that starts hard and stays hard (phrasing!), but it does. Anyway, once you’re done torturing yourself trying to beat a level, you can just start the game over and play the all-new funky mode as Funky Kong. He’s a character who has FIVE hit points, doesn’t get hurt by spikes, can double jump, and has a floating ability with his surfboard. Basically, he’s got the skills you’ve come to expect from a platformer, as DK can’t double jump, and a platformer without a double jump is a tough game indeed. Having so many more abilities may make the game sound easier, but often times it makes you so careless you end up getting yourself killed from not paying enough attention. There’s no middle ground. You have it the hard way or the easy way, no “normal” for you.

Once again, this game is objectively fun once you get the ropes. The game could be even more fun if I decided to dedicate my life to getting skilled enough at this game to actually be that. But with the lack of incentives to keep pushing you forward and some overly long and obnoxious boss fights that stop your progress dead in its tracks, it’s hard to find fun unless you make it fun. I basically played the half of this game twice, all the way to the end of World 4 as DK, then again as Funky Kong. Two halves make a whole, so technically I beat the game. If a challenging old-school platformer is all you want, here it is. If not, you might want to look elsewhere.

I hated Donkey Kong Tropical Freeze. I really did. But this review is a testament to our assertion that our reviews are far more objective than most other sites. We don’t have a random number we make up in our heads to attribute to the game. We are forced to examine all angles of the game’s design and come to a conclusion that despite our own tastes an interest, we can recognize where a game works and where it doesn’t.