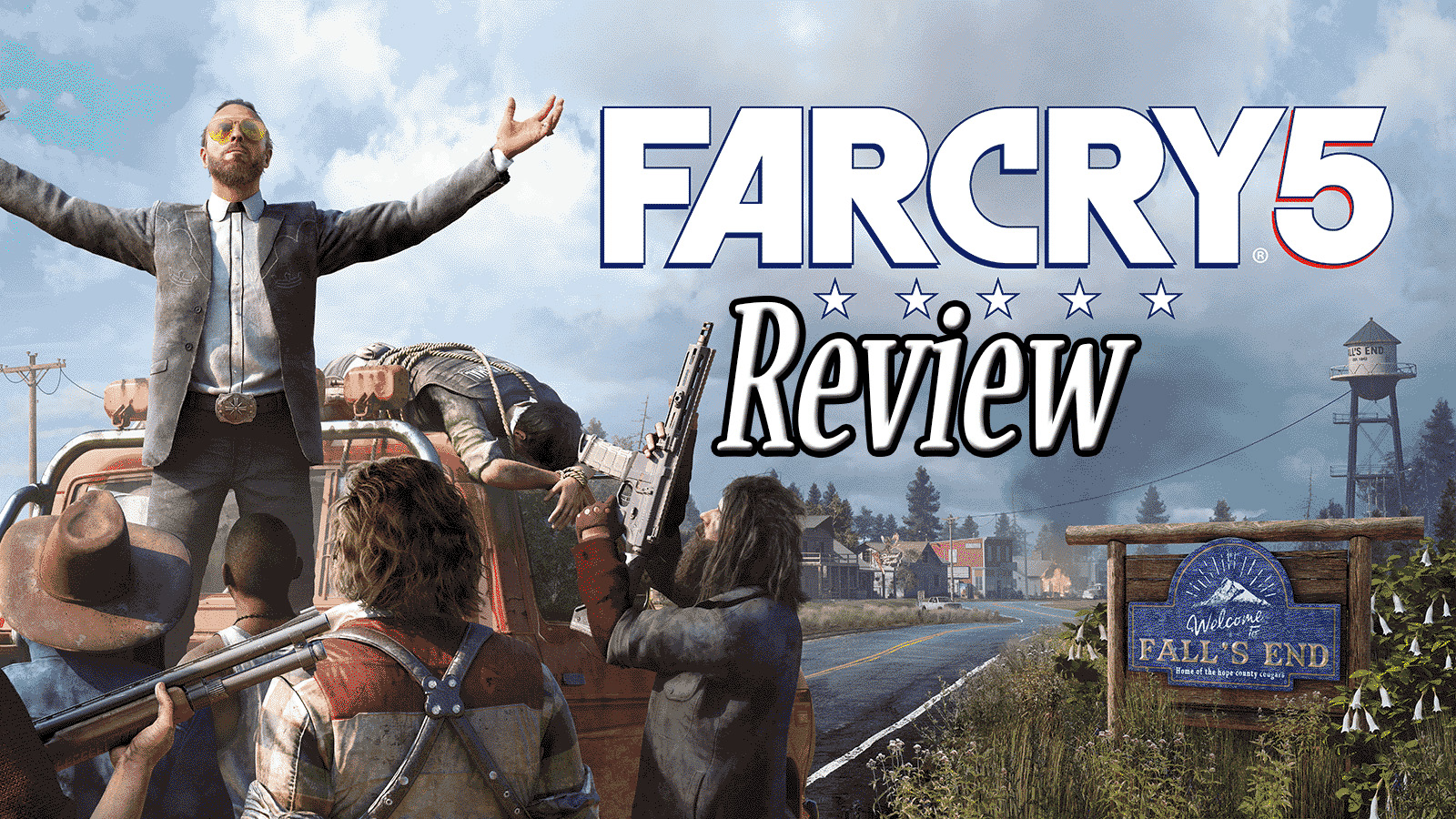 I thought this was AMERICA

Far Cry 5 is the newest installment in Ubisoft’s long-running Far Cry series. Typically traveling to tropical or exotic locations, this new entry drops you right in the heart of…. MONTANA, USA? Yes, that’s right, the creative minds at Ubisoft are no strangers to making drastic decisions every now and again and this time they’ve decided to bring the fight to the States. As a first-person shooter with an open world, you play as a custom protagonist (don’t steal) and fight against a doomsday cult that has forcibly taken over the entire county. That’s county, without the R. Like many of the games prior, it has an open approach to handle each situation, allowing you to either shoot everyone like a maniac or go stealthy like you’re Solid Snake. As an ongoing series, does it bring new life to the franchise or is this just more of the same?

There was a major disparity that occurred during the game’s marketing campaign where it was heavily inferred that this antagonistic cult is supposed to be reflective of some real-world events this past year. On the contrary, the antagonists seem to be the opposite of what people were expecting in that regard. That said, they are still menacing villains, and the cake doesn’t even go to the primary baddie, John Seed, leader of Project Eden’s Gate. You spend the bulk of the time fighting his 3 lieutenants, the other members of his family. Each leader has a lot of presence and menace to them, as they all believe they are righteous and go to great lengths to prove it. In a move that has to be taken with a grain of salt, you get frequently captured by these “peggies,” as the locals call them, every time you reach a milestone in every region. But progression through the game is kept smooth, where instead of being put on a straight and narrow path that will lead you to the end, you carve your own path through the game. A lot of Ubisoft’s games take this approach lately, but here it actually works because there’s so much to do that if you hit a particular story mission you don’t want to carry out, you’re free to take off and go do something else instead. Furthermore, the devs took great care to make a smaller, more tangible map that has a lot of character, both in its NPCs and scenery, instead of the average go-to “look how big our map is!” approach to level design.

Now, credit where credit is due, the work was definitely put in for this game’s OST. The game features a licensed soundtrack full of rock n roll tunes you can hear on the radio. But it also features a radio channel being broadcast by the veggies that includes a slew of gospel choir tunes all based on their beliefs, which adds a lot of character. That’s all fine and good, and the original score for action scenes was unique with a lot of Americana and banjo, but more times than not, I just couldn’t stand listening to the soundtrack. The map music was especially egregious and got on my nerves every time I had to open the map, which I had to open it a lot. That said, the performances of each villain were all pretty decent and well rendered, but it’s going to take quite a lot for the game to ever have a villain as good as Vaas from Far Cry 3.

The DIY aspect of the game serves it very well. For the first time in the main series, Ubisoft has ditched a lot of the busywork you used to find in the other titles. You don’t have to go looking for herbs as often, for starters. Upgrades are based entirely on cash, so hunting animals only nets you more cash instead of having to find specific skins to craft specific upgrades. Crafting itself is kept to a minimum. And for the love of god and all that is holy, you don’t have to go climbing towers, Ubisoft is officially done with tower climbing. Other than that, your standard Far Cry fare is available here. Weapon selection is vast and varied, with bows, rifles, pistols, SMGs, LMGs, rocket launchers, and a couple easter egg weapons. There are also some decent vehicles to choose from, but once you’ve got a car that will take you from A to B, it hardly matters. My personal preference was using an LMG, burst first SMG, full auto SMG, and .50 cal sniper rifle. If that sounds like overkill, that’s because it is. It’s also because I always start off stealthy then whenever I fail I immediately whip out an assault weapon and gun some outposts down. I think I only managed to completely stealth a stronghold once in my entire run. This is some functional, good gameplay that lets you take whatever approach you want to take with anything.

At some point, did Ubisoft declare they were going to be the new Bethesda? Because the Xbox copy of this game was chock full of bugs. Lots of bugs. Not many of them were all that hindering, but the frequency with which they occurred frequently pulls you out of the game. Textures don’t load, animations fail, an NPC keeps saying the same exact thing 3 times in a row with no pauses. It can get pretty obnoxious. Driving still has the autopilot function which is great since even though it’s intended to be used to shoot while driving, it’s actually a nice option to just push while you sit back and pack another bowl before playing some more. Also, there’s an arcade mode you can play at any time during the game and earn money and experience from playing, but most of the levels are unfinished trash made by people who don’t know what they are doing, and although there is a map filter you can use, it’s not all that helpful in weeding out the trash.

Far Cry lost a bit of steam with the last couple games, with 4 being on the bland side and Primal being just a bad idea in general. It has gained a lot by becoming a part of what seems to be the new and improved Ubisoft. This is definitely the best one in a while. If you wanna play the most MURICA game available on the market, look no further than Far Cry 5.