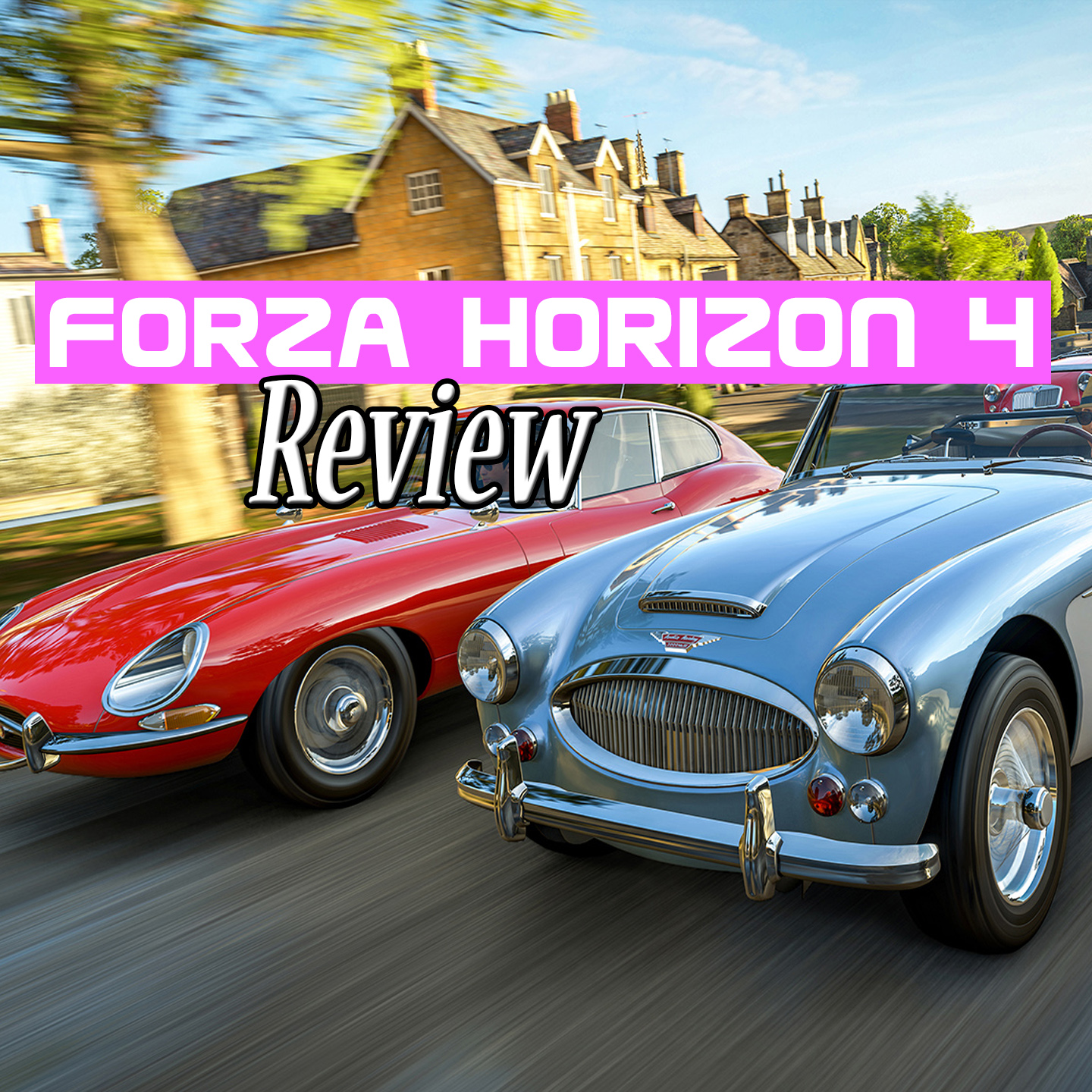 Forza Horizon 4 is the best racing game ever made.

No, wait, Forza Horizon 4 is the best current gen game ever made.

No no no, Forza Horizon 4 is the game ever made forever. End of review.

Okay, no. Fine, I’ll do a real review I guess. Forza Horizon 4 is the eleventh entry in the Forza racing series exclusively on Xbox One (and PC). It’s the racing game for people who love racing games, and also those who don’t. Developed by Turn 10 and Playground Games and published by Microsoft, it’s one of the only killer apps that the Xbox has in terms of exclusive properties. It’s hard to understand why it’s good, even for people who enjoy it. The game in general just has a way of accommodating all types of players. You can play it as a hardcore simulation racing experience full of professional competitors. Or, you can play it as an arcade racer with enemies who are dumb as bricks. Or, you could just ignore the entire game and make a name for yourself exclusively on making liveries and tuning setups for cars. In addition, you can also stare at and sit in the cars you purchased. How could you go wrong?

The power of the Xbox One is in full bloom on this game. Whether you’re playing it in glorious 4K on your X model, or just playing the vanilla version on your S model, Horizon 4 is absolutely stunning. It’s first party games like these that use the full potential of the Xbox’s capabilities. This game is the first one to feature changing seasons to keep the game lively. Every week, the game swaps between Autumn, Winter, Spring, and Summer. The appearance and condition of the large (but not too large) map change dramatically with every season, promising you a different experience every time you get on. Each one of these seasons is expressed in stunning detail, whether you’re driving across the frozen lake of winter or blowing through the foliage of autumn. Every car is excellently crafted. This is a perfect 1 to 1 model of their real-life counterparts. Not to mention the greatest looking rain effects ever, as the car you’re driving gets littered with tiny specks of water. They glisten on your hood and roof as you sprint through the picturesque city of fake Edinburgh.

This game has an astounding way of keeping you invested in the game. You are merely a competitor in the Horizon racing series, as opposed to being the boss in 3. The game conforms to suit the kind of racing you want to play. Four is the power number in this game. There are 4 racing types: Dirt, Cross Country, Street, and Road. The more you complete in a specific series, the more races of that type will appear on that map. For instance, street racing isn’t my bag, so I stick to playing the other types. There are only 3 street races on my map, but several dozen races of my preferred series dotting the landscape. The same goes for stunt challenges, four of which are: danger signs (jumps), drift zones, speed zones, and speed traps. If you like speed traps and beat them, you’ll get more. If you hate drift zones and don’t bother, there will only be a few.

The racing experience itself does a great showcase of the game to get you into the grove. Before you join the official Horizon roster, you have to prove yourself by playing “Year One” of the festival. You get to experience all four seasons in a very short period of time. During that, you learn of all these game types, as well as learning what earns you ‘influence,’ the progress tracker of the game that determines your driver level. You can get influence from practically everything, from races, painting, shopping, you name it. The game is also content throwing Wheelspins at you. Which sounds like gambling loot boxes, but you CANNOT buy them with real money. It’s simply a reward given to you for taking part in the game, and it is very generous.

Finally, the game also has 4 story modes: Stunt Driver, Drift Club, World’s Fastest Rentals, and LaRacer @ Horizon. These challenge races have replaced the “bucket list” of former games, giving you more context to a litany of racing challenges. It gives the game a lot more power to give you some context as to why you’re driving the car they gave you and what the challenge is. Of course, Horizon has its showcase races as well. Five races in which you perform a Top Gear style race against certain vehicles. You race a train, a large hovercraft, and a VTOL, among other things. Never a dull moment.

All the cars sound authentic. All the DJs are as annoying as real DJs. Voices are fine. The licensed OST is certainly a crowd-pleaser. Although it actually features fewer radio stations than the previous iteration, the lineup of songs still fit the mood of the game to a stunning degree. That is if you even care about the soundtrack. I do, but many gearheads may agree that the only sound they need to hear is the sound of the motor.

As stated before, you can play this game however you want. When you set up the difficulty, you can choose from more than 8 difficulty levels of driver AI. The AI itself is good because it simulates real drivers, rather than relying on cheap rubber band tactics like other games do. From there you can pick if you need traction control, stability control, or steering help. Then how to see how much help you need with breaks and whether or not you need a line to show you where to drive or just where to hit the brakes. Then you select transmission. Then you set if you want damage to be real, simulated, or completely absent. Then you select if you want the rewind feature enabled. All of these settings determine how much money you get at the end of a race. The more assistance you turn off, the more bonus money you earn. It absolutely is a “play how you want” game that will accommodate everyone.

There’s also a section in the menu screen called “My Horizon Life” that tells you what your progress in every facet of the game. The race types, exploration, photos, cars owned, paint jobs, online races. Absolutely everything is tracked and rewards you accordingly. And those wheelspins you earn are a fine motivator to keep you playing. That’s along with the perks you get just from getting points earned from driving, in or out of races. Also, every week, with the new season, comes new challenges. In the #Forzathon section of the menu, you can view challenges that are started daily, and up to 3 can be completed per day. There’s a challenge of the week that will ask you to buy a certain car or type of car and complete four challenges with it. Furthermore, all this challenge participation will give you an alternative currency (which also CANNOT be bought with real money) that you can spend on special prizes for the season. You can also partake in “Live” events, which is basically a team car meetup where you all head to a place, have a chat, take photos, then work as a team to complete 3 challenges. The multiplayer is seamless, and unless you specifically ask to play alone, you will encounter other drivers. But you have nothing to wait for when you launch the game. Just boom, you’re playing and other people are on the map.

As stated many times, the game constantly finds ways to reward you. Everything you do in this game will get you credits and influence. You can do anything you want to and the game will cater to how you want to play it. The only frustration I’ve found in the game is that during multiplayer races, one bad turn can ruin your entire run. But that’s my fault because I rely too heavily on rewind and drive like a maniac. No more needs to be said. Unless you hate racing games explicitly, there’s no way you can hate on this title.

The developers of Forza Horizon 4 worked very hard in making sure that this installment of the series addresses a few of the sticking point and nags from the prior entry, but even that game was merely just shy of absolute perfection. This one finishes the job while opening up the game to new possibilities for the future. I implore you, please play this game. The demo is free, and you can play the full game if you own Xbox Game Pass. You could get the whole entire game for just a $10 single monthly subscription. Or just buy it, you can do that too. And you should. It’s that good.