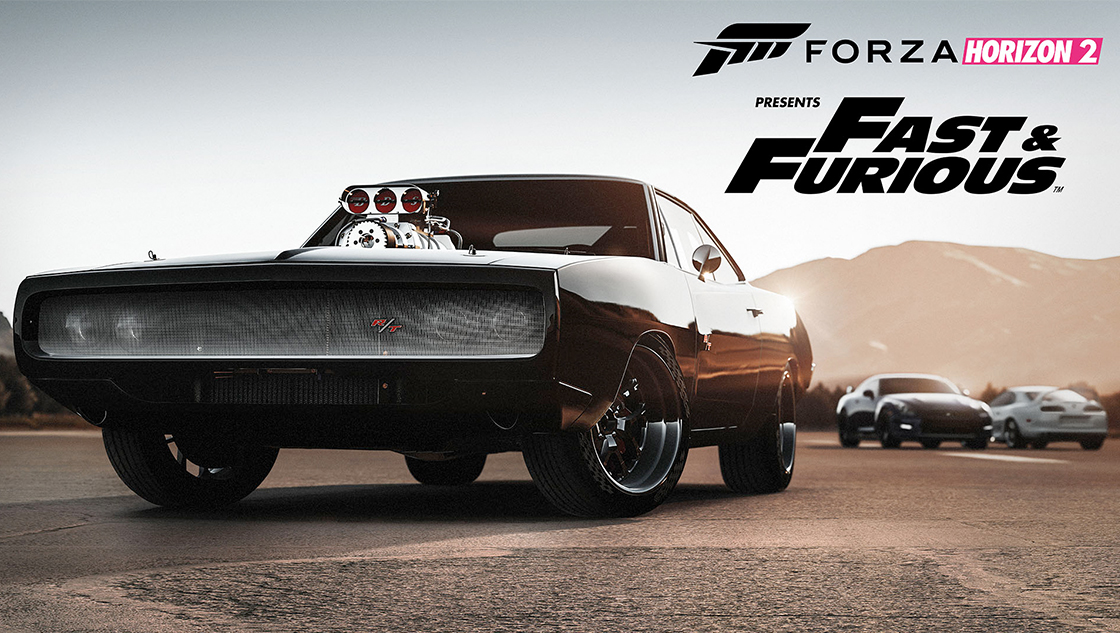 Did you all see Furious 7 yet? Great! Splendid action movie! Now that you’ve experienced the thrill of the film, it’s time to play the tie-in game! What’s that? You didn’t know there was a tie-in game? Of course there’s a tie-in game, all of the biggest properties have tie-in games.

But tie-in games, they suck right? After all, the past few years have brought us gems likeDuck Dynasty, Walking Dead: Survival Instinct, and even a tie-in for the previous F&F film, Fast & Furious: Showdown. With the last, I found the decision to re-release an old PS2 game from 15 years ago on last gen platforms was an odd idea but… oh what’s that? Showdown was released in 2013? And it’s brand new? Oh, how embarrassing. But still, this is all just standard operating procedure for tie-in games.

Thankfully, the tie-in game for Furious 7 is different. It’s called… wait, what? It’s called Forza Horizon 2 Presents: Fast & Furious. (Well, that’s going to need some shortening, let’s go with FH2p:F&F.) That’s not a new game at all! That’s just Forza Horizon 2 with some new DLC, isn’t it? Well, not exactly.

FH2p:F&F was released exclusively to Xbox One on March 27th to promote the film (released April 3rd). The game was available as a standalone download, so you didn’t need to own FH2 to play it. Also, it was free for two weeks, and now it’s a whopping ten US Dollars. In it, you play as the character from the game, post-championship, just chilling out when Tej Parker (Ludacris) from the films calls you and tells you he needs you to win a bunch of cars and have them delivered to… well I guess you’re delivering them to the movie, we’ll say that.

So, this isn’t really DLC, but it’s not a full game either. Unlike the full game, you can’t modify cars, and you can only drive in the 10 unlockable cars. Roughly 1/6 of the map is unlocked. The races are mostly retreads of previous races from the original game, with some new interesting races thrown in. Also, the soundtrack is reduced to a couple of the hits from the prior game. All of this would sort of make it a glorified demo, right?

But then there’s the new content. The cars are all new, the soundtrack has a couple of new tracks added on, new “bucket list challenges” have been added, bonus boards have been placed in new locations, there’s a new showcase event, and Ludacris himself voice-hosts the game, telling you where to go and what to do. When a demo ends, for the most part, you have to start the game over every time you launch it. Launch, FH2p:F&F , however, and all your progress is saved.

You know what? This isn’t a demo, dlc, or a new game… it’s a MOD! A mod, of all things, and it’s on your Xbox One right now, ready to play (for the aforementioned $10, slowpokes). How can they get away with this? Well for starters, Forza Horizon 2 is a fantastic game, and a mod of a good game can’t be a bad thing. Now, I’m going to go ahead and stop this paragraph dead with a full disclosure: I really really really like the Horizon games for the Forza Motorsport series. Like, rated 11/10 levels of love here, which is a bit excessive for just a racing game, but if you don’t want to take my word for it, I’ll point out that the game is generally well-received.

This idea here, releasing a mod as a tie-in for a franchise seems to be pretty new. And you know what? I think this is a damn good idea and more games should do it. Why not? Just look at how all of this works. You have a game that’s already been finished. All you have to do now is add in some original content. Replace some characters with your characters (or in this case, cars), throw in some serviceable voice over work and audio tracks, and maybe add some new gameplay elements to mix things up. That’s all that was done with FH2p:F&F and it’s rather enjoyable. Even better, they may have even used this mod as testing for a new gameplay feature: NOS. That has not been a feature in the Forza games, but may find its way into more if it turns out well-received.

All of this must certainly cost way less money and time, and if you’re modifying a game that’s already considered generally favorable, you’re also guaranteeing your release won’t be a turd. After all, people are smarter than you think, and people already savvy of the game industry aren’t easy to fool when you’re throwing together a companion game with little intent on making anything worth playing.

When FH2p:F&F ends, the game asks you rather politely if you’d like to buy Forza Horizon 2. Even after all this business with calling it a mod, it still serves as demo for the full game. It’s not the EXACT same game, but it is mostly the same. If you got the game for free, you certainly got your money and time’s worth of content to enjoy. Otherwise, if you paid $10 for it, you paid 1/6 the price of a brand new game and get, as mentioned earlier, 1/6 of the map. I’d say, overall, the game lasted me a good 6-8 hours between finishing the story content and doing the small amount of extras. Time/cost value-wise, this is still better than what many AAA big budget releases offer. With this mod here, you get the benefit of playing a AAA title with the cost of a small indie release.

What can the game developers and media producers take away from this? Maybe they should do things this way instead. After all, Furious 7 was a major success, and who’s to say this little game didn’t have some hand in it. And if it didn’t have a hand in its success, who’s to say it wasn’t a nice little bonus to all the people who watched the film?

I’d look forward to more releases like this. Dragon Age Inquisition Presents: Jurassic World where you use the game engine and fight dinosaurs! Grand Theft Auto V Presents: The Transporter Refueled where you cut down the map to just the main city and carry out a few missions as Frank (is it still Frank?). Or Far Cry 4 Presents: Mission: Impossible: Rogue Nation, because it’s a decent shooter and I wanted to see how many colons I could cram into one title. Okay, these are all awful ideas, but I’m not here to make these games. I’m here to give you a damn good idea about how we could handle video game tie-ins for the future.