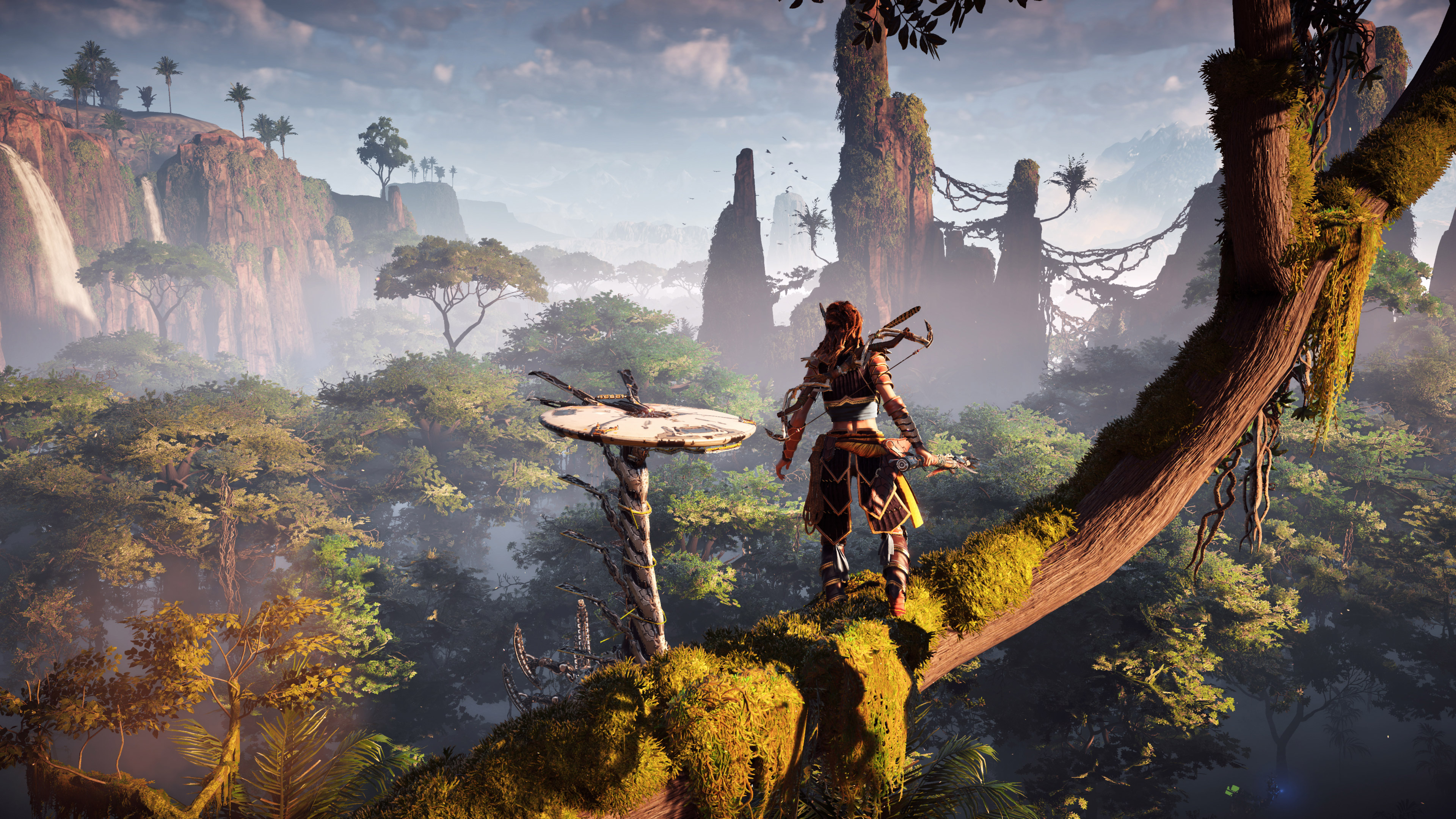 Horizon Zero Dawn is an open world action/survival game developed by Guerilla Games and published by Sony Entertainment. It features Aloy, a redheaded tribal fighting in a post-apocalytpic landscape ruled by giant robot dinosaurs. The plot follows her discovering her heritage, but that’s not important because you fight giant robot dinosaurs, and that’s really the only reason you need to pick up this title. In hindsight, it’s surprising that giant robot dinosaurs haven’t been done before in video games, but here we are now. The game had a lot of hype to live up to, but did it deliver?

Every once in a while you say to yourself, “Hey, these graphics are pretty good”. Even less rare is a game where you have to stop doing what you are doing and just look at the scenery. HZDs graphics are an exemplar of modern graphical quality. Featuring many various biomes across its massive map, this game is absolutely astounding in the level of detail and finesse put into ever square foot of landmass available to explore. If anything, the water looks a little bit “off” compared to the rest of the artwork, but by it’s own standard is still an absolute stunner.

This is the only part where there’s a major flaw. The main quest actually feels like a waste as it manages to take a unique idea and make it less and less interesting as you delve further and further into the secrets of world. There’s a point during the campaign where you are in an old building and exposition gets dumped on you in the form of holograms and audio logs. It begins interesting enough, but as you go from one recording to the next, these tombs of secrets feel less like an intriguing adventure and more like a slow Disney ride. In the end, what happened to the world doesn’t matter because it’s happened and nothing can be done about it, and you’re left with a protagonist who has fulfilled what she set off to do. As with a lot of open world games, you will find that the side missions frequently offer more intrigue that the main story.

The robots of the game sound as threatening as they look. With unearthly sounds screeching as you get spotted, the threat of the dinosaurs is made all the more real by some excellent audio design. You can hear the wind in the trees, the rushing of water in the river, the bitter cold rustling of snow in great detail. Voice acting was adequate, but Ashly Burch, who played the series protagonist Aloy, really made the mostly lonely adventure stick to you. The score of the game, while not spectacular, was a fitting mix of tribal percussion and woodwinds and some electronic pad tones that added to the already rich atmosphere of the game.

GIANT. ROBOT. DINOSAURS. It’s unfortunate that the game has you fight human enemies, because that’s not as fun as fighting the dinos. In fact, every second you spend on story could always be better spent just fighting the dinos. The gameplay is the core of the experience. What’s interesting is, the actual mechanics of the game aren’t that original, but the design of the game makes it feel original. HZD borrows elements from many games that have changed the scope of gaming over the past few years, but feels like a really sturdy, well-made package.

I thought I was done with this game when I beat the campaign, but then I went back to it to complete some of the unfinished side quests. After tracking down some of the optional boss fights, I was glad I did because it really highlights how good the game is that fight after fight is a proper thrill ride. The exhilarating feel of downing a robo-saur with a spear and some arrows is one hell of a feeling. Even if there aren’t missions to complete, there’s plenty of real estate in the world to just go hunting for the fun of it, and that’s what really makes the game great. The gameplay is just that good and just that much fun.

The only thing that prevents Horizon Zero Dawn from absolute perfection is the less-than-great plot that doesn’t really do a whole lot. But it’s important to note this: if you were wondering whether or not this game is worth the purchase of a PS4, it is. Everything that makes the game great is worth experiencing on that powerhouse of a console. So if you were waiting to pull the trigger, now is the time to pick one up. This game has raised the bar to a new height.