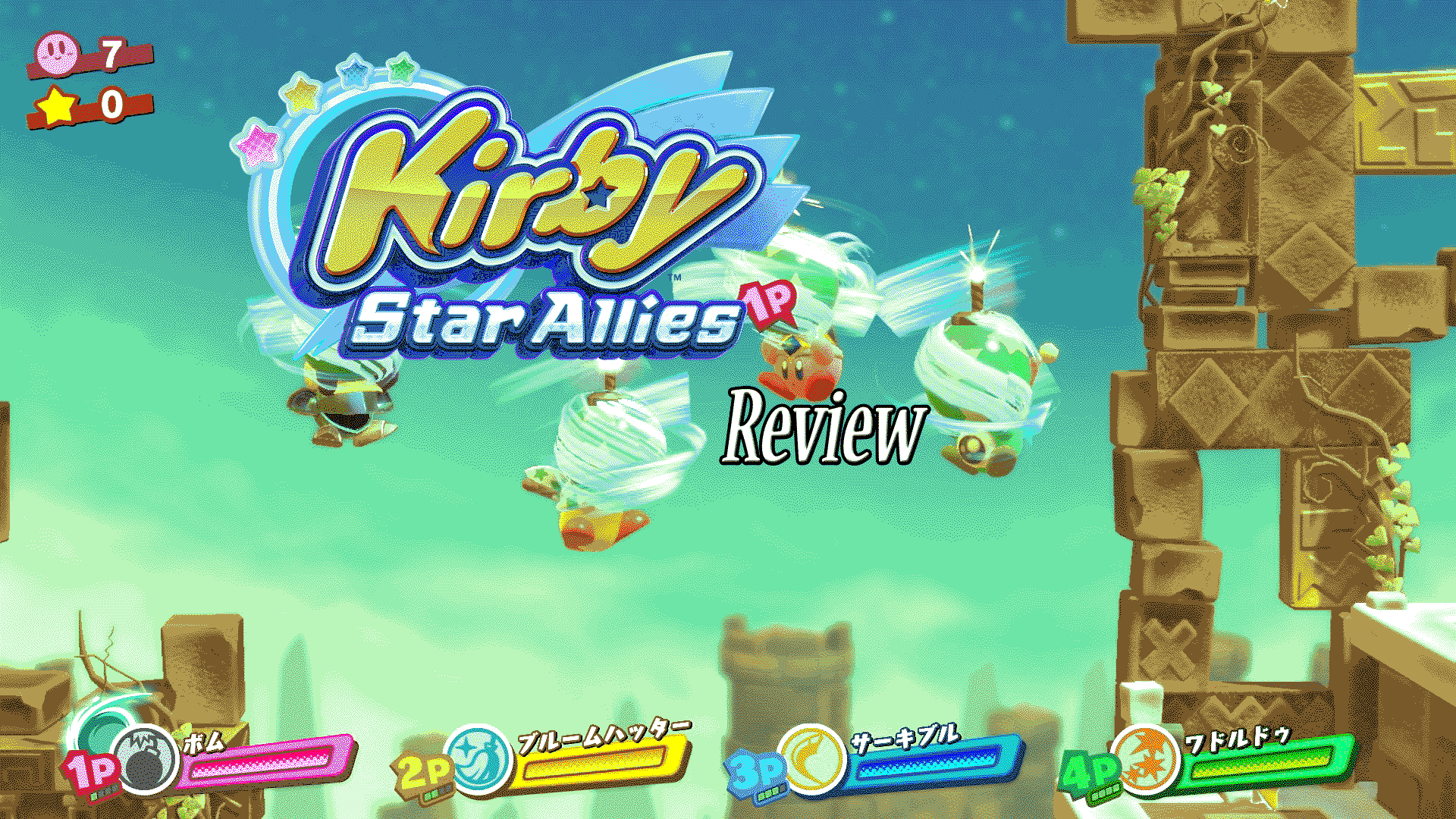 Kirby’s Paint & Tile Plus in Westgate

Kirby Star Allies is the newest installment of the many various Kirby titles developed by HAL Laboratory and published by Nintendo. The game features ‘classic’ Kirby gameplay in which you run through various 2D levels, inhaling enemies to absorb their powers, featuring many different abilities you can learn along the way. This game is different in that it introduces 4-player multiplayer that can be done either by “friending” enemies to follow you around (CPU controlled) or by having your friends join in on either a split joycon or other extra controllers. If you’ve ever wanted to play the whimsical shenanigans of Kirby with your friends, this is the game for that. But you can still play solo. This review is based on the solo experience and will be subject to changes if multiplayer opportunities arrive.

This is a fully realized 2.5D Kirby game unlocked to its fullest potential. If you’ve ever thought to yourself, “Man, I’d love to see this Kirby game in greater detail,” then this is it. What was once just a nicely detailed backdrop is now a more fully developed 3D skybox with wonderful vistas for every level you play. Kirby himself is as pink and blobby as ever. There’s not a whole lot to discuss here. Kirby has a certain look throughout all of his game series, and this game meticulously replicates the art design without trying too hard to make things look too detailed. Basically, it looks like a Kirby game should look, end of statement.

Here’s where some of the game’s problems start. Kirby has never been one to have any mind-bending plots or engaging storylines, and that is perfectly fine. Star Allies’ problems arrive from several detractors. What happens in the first cutscene in the game is not all that clear. A big purple heart breaks apart and the all pieces land in a ton of planets/worlds/dimensions/wherever the Kirby games are set. What do these purple hearts do? Uhhhhhhhhh, not sure. Does it make characters evil? Okay. Onward you move to your first level, where you once again beat the ever living hell of that poor tree-thing Kirby is always fighting. What’s worse is there were some plot points brought to life that I didn’t even realize until later on. Like in the first area, King Dedede apparently stole all of the food in Dreamland… except he didn’t because there’s food everywhere.

It’s not until about ¾ through the game that you know what’s going on. Apparently, the hearts need to be collected to summon some kind of dark entity, but why it broke in the first place is still a mystery. To get even worse, it tries to be funny, and as much as I despise the word, it was complete ‘cringe.’ It’s the typical Nintendo PG-rated humor, only it’s neither funny nor interesting. Just more baddies being bad because they’re supposed to be bad. As you venture forth, the levels don’t do a whole lot to motivate you to play, either. As far as rewards go, there are floating puzzle pieces you have to collect to finish paintings. So what do those paintings do? Absolutely nothing, they are just there to be there. This led to me actively ignoring side-paths and challenge rooms because the reward wasn’t worth the bother. As for Kirby’s brand new “friend” ability, there’s no explanation as to how he got it, he just does. The challenge of the activities is another issue, and I’ll touch on that later, but…

There are some moments in games where it seems like they just didn’t care. The game has two sets of soundtracks. There are the new arrangements of classic Kirby songs that are meant to sound like upbeat, modern takes on the old tracks but sound a lot like they were just fed through a more advanced midi machine that just spits out the music. Other levels are apparently okay with just playing unmodified tracks from the older games straight up. No catch, it’s literally just an MP3 of the music from mostly the first game. I’m not sure if this was intended to be a sort of re-introduction for new fans and old ones alike, but the bouncing back and forth between classics and revamps just doesn’t make the cut either. But it’s not just the soundtrack, the sound effects have very little interest. Some of the powers you get seem to have lost their “punch”. The rock ability should be a punch but it’s not. There’s also the microphone power that sounds as underpowered as it looks, and it used to be a fantastic blast of noise in the older games. Even the infamous “crash” power doesn’t feel very weighty. It’s there, it’s just not inspiring. The game really only hits a crescendo of noise when you discover power combos for the first time and get a neat little cutscene showing the power being activated. Once that’s done, back to the generic mud. There’s nothing ‘wrong’ with the soundtrack, it’s certainly functional, but that’s it and not much else.

You read that right, this game managed to screw up the most basic of recipes. All they had to do was make a decent Kirby game, but instead, this mess of a game happened. For starters, Kirby games were already relatively easy when Kirby was all by himself or had friends to combine powers. Now imagine if it’s you and 3 other players (or CPUs) and no changes have been made to the game’s difficulty whatsoever. The multiplayer element, the whole point of adding “allies,” is completely undercut into how utterly dull and pedantic the combat becomes. You oftentimes don’t have to fight because the CPU friends will fight for you. Sometimes. If they feel like it. The companion AI is finicky at best. Having a full party to fight bosses is a disaster in its own right. The screen comes ablaze with so many effects, flashes, and movements that I had a hard time keeping track of where I was even standing. Even while being a complete clusterf*ck, the miniboss fights are now 15-second long affairs (if that) and full bosses take no more than 2 minutes if you have a full roster. Some challenges did arise later in the game, but even then there was neither any sense of danger nor challenge. This new multiplayer facet felt like a complete farce and a waste of time.

The powers aspect was also needlessly confusing. It wasn’t until a third of the way through the game that I realized how to combine abilities because the game does a poor job of explaining how the system works. It shows what button to push for the first two levels, but doesn’t really go that far into how things work. I eventually figured out that basically, melee superpowers can be supplemented by characters that have elemental powers. That’s pretty much it. The combinations are vast and endless, but it’s not like you need combos when you have a 4 person attack team all armed with fire swords. Not to mention you can summon legendary characters to aid you including Dedede himself and even Meta Knight. Given the opportunity, you could actually have an entire army of Meta Knights make up your team, thus further undercutting the difficulty. Also, the loading times are slightly unnerving, but only because of the game’s history of having almost instantaneous load times when you enter a door. Whereas in this game, it takes a few solid seconds while a random hint displays on the screen (which you can thankfully turn off). Oh, and 30FPS? On a game that looks like this? How is that even allowed?

The game felt like a chore to play all the way through. The mind-numbing ease of the game meant I only ever got hurt when I was zoning out. It’s flat-out boring. None of the game ever made me want to play because I thought “oh yeah, I want to play some more.” Instead, my thoughts were more along the lines of “let’s get this over with,” sadly. Which is a real shame, because the game has one good aspect going for it. At the final boss battle, the 2.5D playfield is exchanged suddenly for a fully 3D battle that gives you access to free movement and aim & fire abilities to take on your foe. It’s less of a Kirby game and more like I was just suddenly playing a decent level of Panzer Dragoon. Seriously, it comes completely out of nowhere, and it was absolutely amazing, which is why this category gets a point. But is the game worth dealing with just to get to the final boss? No. Thankfully, the entire game is pretty short, teetering under 5 hours and most of that time felt like a waste.

Kirby Star Allies has no business being as bad as it is. If you want to see how NOT to make a Kirby game, look no further. This just feels so tragic, I loved how fun and relaxing Kirby games were, but none of that magic will be found here. Everything about this game was a devalued experience as if the game were some sort of off-brand knockoff. Kirby may still be a cute little pink puff, but even his cuteness wore thin as levels went on and on. Skip it unless you are a huge Kirby fan, and just watch the final boss fight on YouTube or something.