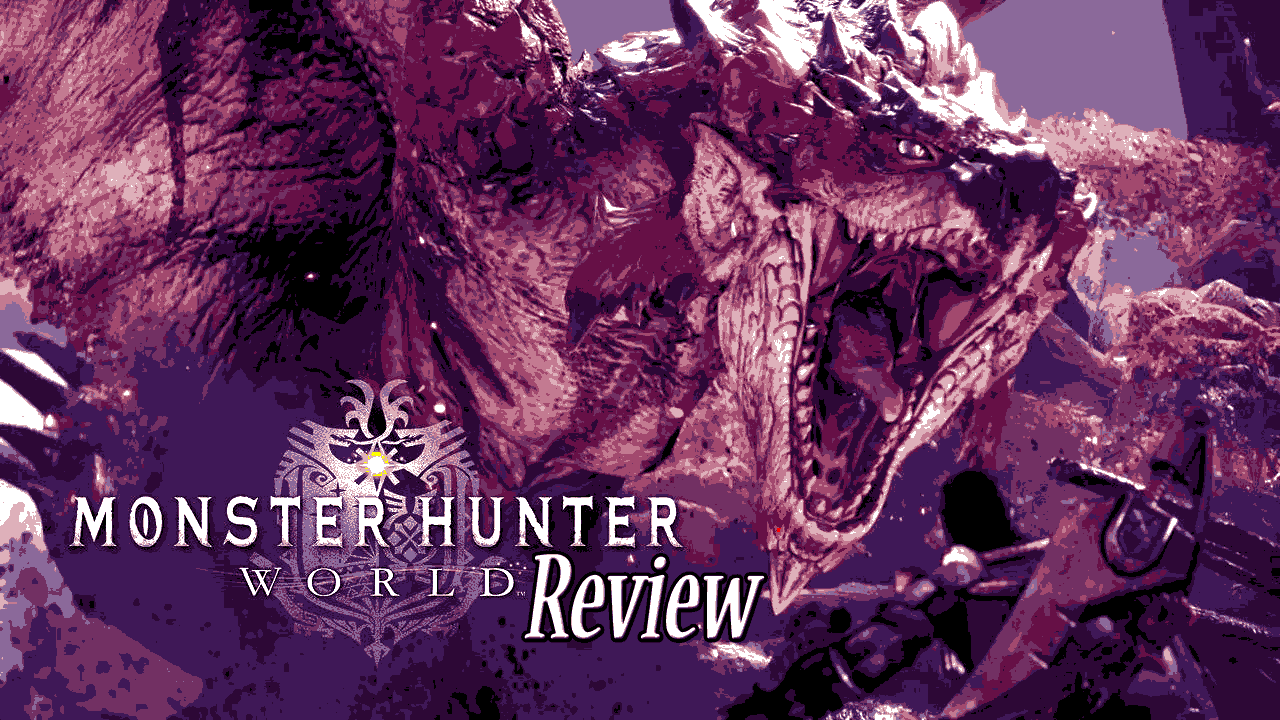 Hey Now, You’re a Monster, Get the Hunt On, Go Slay

Monster Hunter World is an action RPG developed and published by Capcom. No matter how you slice it, this is a big game. It’s the sixth core game in the Monster Hunter franchise, which began in 2004. Already, it has broken many records. Not only is it the highest-selling Monster Hunter game ever, but it is also the fastest selling game in Capcom’s history. It could not have arrived at a more opportune time, coming hot on the heels of f*ck-all for January 2018 (save for a few niche games.) This title made many big changes to the series to gain the appeal of western audiences, as well as general improvements across the board.

The amount of color this game utilizes is mind-boggling. Every single environment has so much to see and looks almost too perfect. The many locations you go to are not only extremely diverse, but the palette shows it off the absolute best it possibly can. Sometimes a game can use too much color and become a mess, but that’s not the case with MHW. Nothing fades into the background or becomes mashed up with the scenery; instead, every single element on display has a gorgeous and memorable design, to the point where you don’t even need the game to tell you what things are when they are highlighted. You know when you’re picking up watermoss, herbs, or certain mushrooms because they are so visibly distinguishable. And that’s just the environments. The monsters all come in a wild variety of colors and designs that mange to be both familiar, yet entirely unique at the same time. Sure, the monsters basically look like dinosaurs, but they are dinosaurs that look like they specifically belong to the game, with many uncommon mashups of arms, legs, heads, and tails. This is all paired with a simple but elegant character creator that manages to keep things very simple but offers so much diversity in what you can make your hero look like.

In Monster Hunter World, you arrive in a new world where there are monsters. You are a monster hunter and therefore you must hunt the monsters. Once you’ve killed the monsters, you go on to a new area to kill more monsters. BRILLIANT. Honestly, with a game of this design, you really don’t need to be encouraged to play it, as the thrill of the hunt is exciting in its own right. And the game gives you plenty of reasons to come back again and again with daily login bonuses and a genuine sense of accomplishment with tons of gear and stuff you obtain after slaying the beasts. I do know that later the story gets more serious, but it hardly matters. There were many points where I didn’t even bother to read what people were talking about because I didn’t care, and I don’t expect non-voiced lines to be important anyway. That said…

As I just said, a lot of the dialog is not even voiced. That’s not quite a deal breaker but it’s just very inconsistent. I played this game in English and that was also a big mistake, because the English voice cast for this game are, well, terrible. I don’t know if they just didn’t care but it doesn’t sound like much effort was put into the English VO. It’s somewhat justifiable because up until now, the game barely registered a dent in the English-speaking market. Also, the soundtrack is very generic. The song that plays while you are at the base, Astera, is quite memorable, but gets stale as it is a very short track that loops over and over, and you may find yourself spending a lot of time there. The rest of the music just seems like general tension music with orchestral ‘cinematic’ music that doesn’t do a whole lot with the theme; it’s just there. I actually turned the music off for this game because thankfully, the sound effects are incredible. So much time and energy were put into the different sounds of all the monsters, wildlife, and cooking that it redeems this category quite handsomely. I mean, last I checked, despite the fact that your character doesn’t speak, you get a choice of 20+ different types of grunts and shouts that your character can emit whenever they do something interesting.

When you first start, the gameplay is a bit on the stiff side. Your movement is sort of stop & go when it comes to your attacks and is not as fluid as other games. But this sort of ‘stiff’ control is supplemented by the enemy NPCs’ movements sort of matching your controls. Fights are really slow-paced, and you’ll find yourself having to position yourself appropriately before every strike, because some attacks take up some charge time. If you don’t strategize, you’ll find yourself swinging at air if you just mash the attack button. Granted, there are opportunities to smash the attack button, but you need to be patient for those times to arrive. The game has so many variants and so much to craft, improve, and build, that it suits a lot of play styles, as long as all of them are offensive strategies. The game seems to have implement a stealth element, but rarely have I seen it used. The game is like a new pair of shoes, you gotta break them in before they’re comfortable, and just like the shoes, they will feel less and less stiff the more you play.

Nitpicking time! First, the game seems unsure of itself at times in terms of whether it wants to be single player or multiplayer. It is genuinely a multiplayer game with a sort of MMO-style interface, but it feels a bit empty at times. It doesn’t help that the game is super choosy with when you can and can’t have people join you at the start of a mission. The way you start missions also tends to feel a bit off-kilter. This is due to how the missions are offered and how you engage them. Like, you have to start a mission to open up a lobby for the game, but sometimes people can’t join you anyway, so you’re walking around staring at a UI that looks like it’s waiting for players even though they can’t join. Playing online with a few friends was also a bit rough around the edges.

The game also has mountains and mountains of things to learn. It takes crafting to a whole new level and if there’s one gameplay mechanic from this generation that I despise the most, it’s crafting. Not only is there a ton of crafting but upgrading gear and other odds and ends often asks for very specific items. I’ve heard many a tale of players having to fight the same monster over and over again just so they can get a specific drop from the monster and use it to craft things. It’s not really ‘fun’ to me when you need to grind too hard just to progress, and sometimes there are items you need to find that the game doesn’t really tell you where to locate them. All you can really do is loot everything your scout flies see and save it in your box for eventual use.

Monster Hunter World was a game I never thought I’d play. I knew absolutely nothing about it going in, not even knowing that the game featured multiplayer. But as stated earlier, the game-o-sphere was a little bit dry in terms of new quality content that wasn’t completely niche. I’m glad I did, because despite the numerous tutorials you face as a newcomer, the game is very welcoming to those who are unfamiliar with the series. I’m glad I picked it up because if I hadn’t, all the exciting monster hunting action would have gone amiss. I intend to continue playing the game when time permits, this one’s a keeper.

Also, check out this video if you get a chance, the sequel with all your tips and tricks is coming soon.