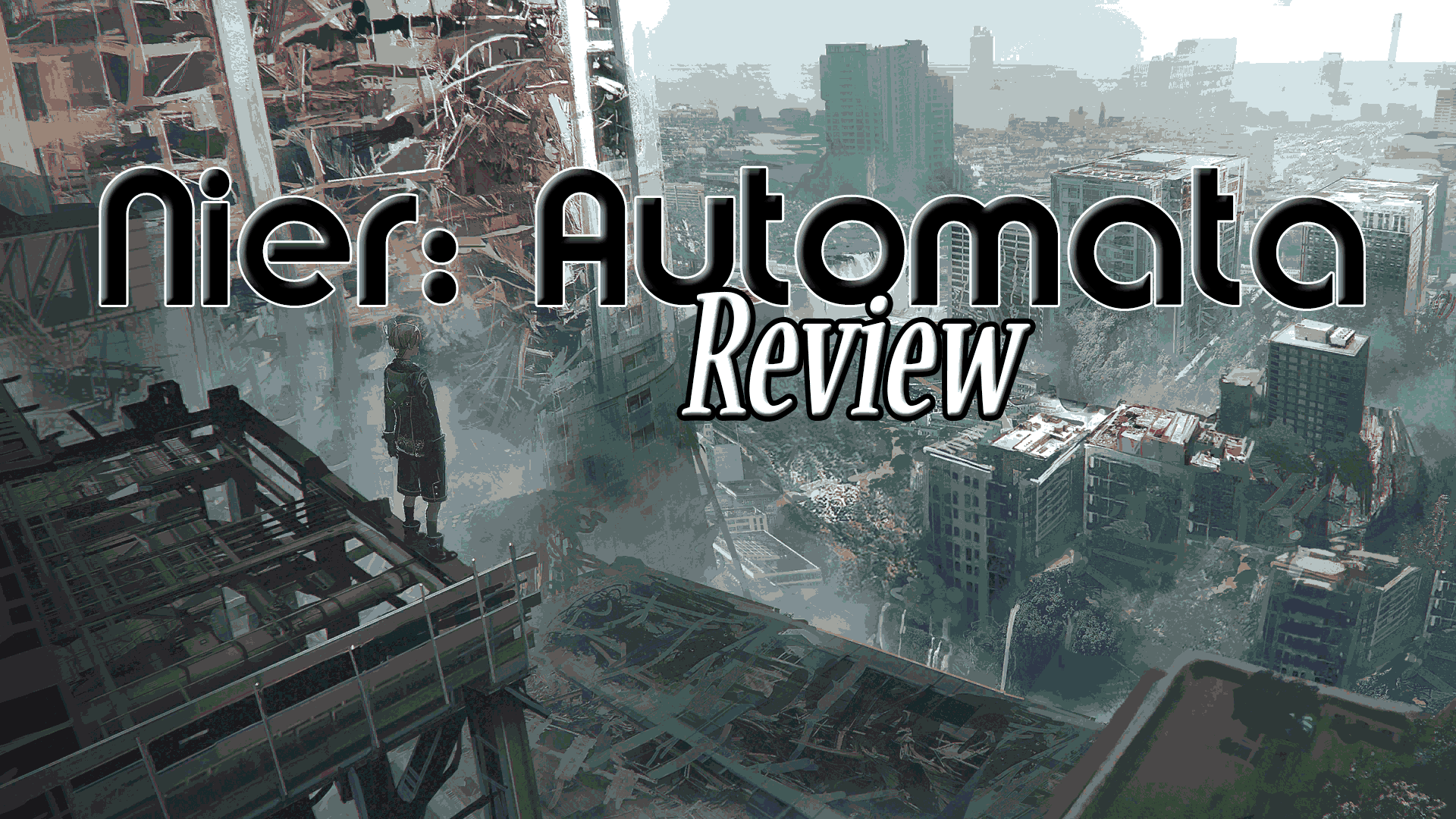 Nier: Automata is a bizarre and brilliant brawler and bullet hell shooter (at the same time). It was created by Yoko Toro, a known maniac and auteur in the gaming world. It was developed by Platinum Games and published by Square Enix. This game is quite the experience, with a really unusual setting and plot. The game stands out in the crowds of otherwise samey AAA gaming titles. Featuring 26 endings, one for each letter of that alphabet, and 5 real endings that require five individual playthroughs, it’s an experience that defies explanation. The first run of the game takes about 10-12 hours to beat, and at the end is considered an unfinished playthrough of the complete experience. This review will be focusing on the first experience, to be reviewed later on after the full game has been witnessed. But as it stands, the game has been technically beaten with Ending [A] achieved and deserves a review.

So, there’s an immediate problem with this game. The graphics hurt tremendously. Featuring some of the blandest overworld assets imaginable, you see your way through the game while exploring an empty city full of nondescript concrete buildings, an open desert, a forest, a factory, an amusement park, and some waterfalls, all of which generally don’t look that great. The bit at the amusement park has a lot more to write home about in terms of eye candy but at the same time, it seems to be stuck under some sort of desaturation filter that keeps the color from really popping. The problem is the design doesn’t pop, it sits there and has the sort of brownish graphics you’d expect to see in the early “realistic” games from the last generation of gaming. And that’s the other problem, at best, the graphics look like they could easily run on PS3 and Xbox 360. But, all that aside…

At first glance, the story presented as simplistically as possible. Aliens invaded the Earth by unleashing a deadly array of cylindrical robots. Or machines, as the game prefers to call them. To combat this, the humans have launched a deadly array of humanoid androids called YoRHa to fight the machines in order to reclaim Earth. Right from the get-go, nothing at all is cut and dry. One part sexy maid cosplayer, one part killing machine, you play as 2B, one of the androids. You make your way down to Earth to start lending a helping hand to the local resistance faction, even more androids that are dedicated to the cause. But something seems amiss. There’s almost no sign of the alien threat that prefaced the game nor any sign of human life whatsoever. Enemy NPCs are all over the place and just stare at you instead of fighting you. Nobody has an explicable backstory. The game raises a lot of questions, of which only some are answered by the end of the first run, with a promise of more if you keep playing. Absolutely a truly unique and oddly intriguing experience, this game will keep you guessing and second-guessing yourself every step of the way as you slice your way through some batshit crazy boss fights and increasingly tough automatons. On top of everything, the cherry on the cake has to be the existentialist themes, as the game is littered with questions of the point of life, the nature of mankind, and what it means to be an emotionless protagonist on par with Final Fantasy’s Lightning in terms of enthusiasm and general demeanor.

The game might be faulted for not having a very varied soundtrack, but only at first glance. A lot of the locations in the game have one background track that loops and loops until you’re in another area. But as things go along, you get more variations of several of the themes. From vocal mixes to 8-bit versions, Nier Automata’s OST might not be spoiled for choice, but it makes up for that in spades with the melancholic melodies and large singing choirs that play across the game. As for the sound itself, there’s a lot of sound going on the screen all at once. While exploring the ruins of Earth is peaceful and subdued, the number of sounds in fights are bombastic. You have the clanking of the robots, your whooshing attack noises, sword-striking sounds, and Gatling gunfire all at once. An impressive orchestra of machine fighting machine, the sound is engaging and gratifying. The satisfaction of tearing into an enemy NPC is definitely a satisfactory experience by and large. The voice acting could use some work, but on the budget it had, it seemed to make do. It’s possible the voice casting was also affected by the voice actor strike at the time, possibly the reason many voice-over artists in that game don’t have a lot of games under their belt.

Platinum Games seem to have a winning formula that goes across their releases from titles to title. They’ve mastered the brawler while keeping each and every game they put out having enough fundamental differences to make every release unique. In Nier: Automata, optimizing your skills via powerups, timing your attack combos and your dodges in melee combat, all while simultaneously shooting at them with a floating gun robot by your side are all factors. You may be wondering, how is that all possible? Good question. No idea, but somehow it all seems to work out when you’re playing it. And oh, how satisfying it is. It’s weird. The machines you fight in the game are some of the most generic looking things ever imagined. Very low-concept, rotund, cylindrical bodies with basic arms and legs like that of a windup toy. This was likely intentional, but that said, while the enemy variety is not very large, their fighting techniques get updated enough to keep you on your toes, changing the formula slightly as you progress.

It’s amazing, how much fun can make you forgive minor nuisances. The game as plenty of nits to pick. The map is garbage, the graphics are bland, the fast travel system is garbage, it’s sometimes hard to know where you even are going, and some segments can be overly long. It’s a big pain in the ass to talk to NPCs because while the controls are fully suited for combat, they feel way too floaty when you’re walking around in a village to talk to other people or open crates. The camera is almost as inconsistent in orientation then your average Sonic the Hedgehog game. The English voice acting is okay at best. Wait, why did I like this game again? Oh yeah, I remember. Fighting swarms of bizarre clockwork-esque robots as a sexy female maid android ninja (who is also blindfolded) is an absolute blast.

NieR:Automata is one of the most unique and perplexing brawler games you’ll ever play. The way it gels melee combat with bullet hell shooters is a feat that needs to be seen to be believed. Held back only by graphics that appeared to have been summoned on a shoestring budget, you might write this game off as a subpar gaming experience. That is not the case. This game deserves to be played if you have a PS4. But with all that said, one question remains. If Sony got this absolute gem of a game for the PS4, that the actual hell was Microsoft thinking when they decided to cancel Scalebound for the Xbox One? The world may never know. But until then, if you’re a fan of Platinum Games, melee combat games, bullet hell shooters, bizarre plots and extreme shenanigans, you’re more than welcome to check out this diamond in the rough. Time permitting, I would like to give this game a final score, as simply beating the game for the first time only does feel incomplete as an overall experience. With the game promising more to come, I look forward to completing this wild ride and finding out what mind-blowing twists and turns the game plans to take.

UPDATE: Finished all 5 canon endings. Opinion did not change.

UPDATE 2: After playing the Become as Gods Edition, I have since given the graphics a 10, for a perfect score.