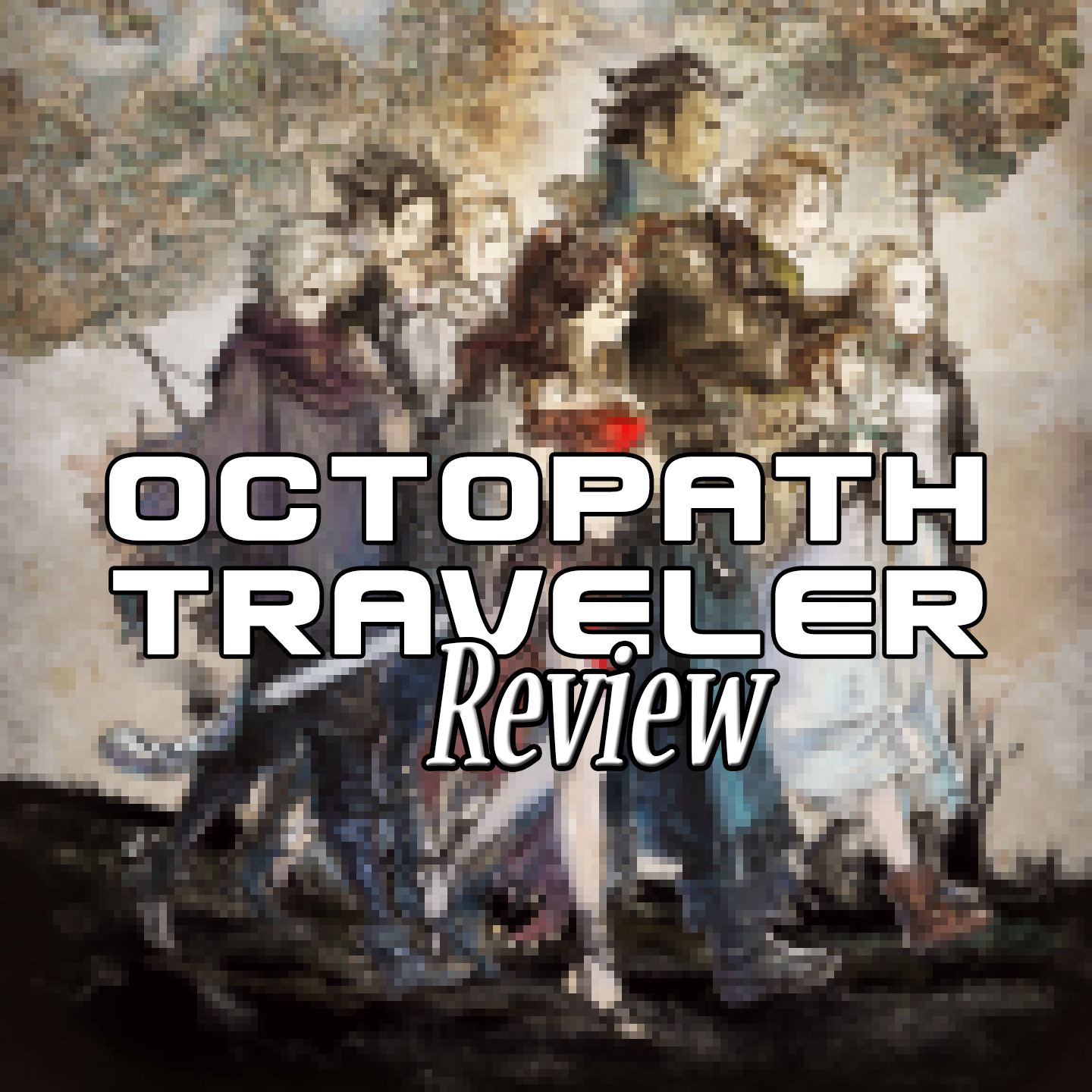 Octopath Traveler is a traditional JRPG developed by Acquire and Square Enix and published by the latter. Well, at first sight, it’s a JRPG that seems to want to revive games from the 90s in almost every sense. It is not traditional in that JRPGs usually start you with 1 main character and the story is mainly about him or her. But this game is defined by having 8 characters each treated more like the main character from a game than secondary characters from standard JRPGs. I grew up with games from the 90s, and it was clear within seconds of the first trailer it was for those fans. But there was more; this game has a demo on the e-shop. I got it as soon as it was available, and I was pleasantly surprised by how distinct the game is. There’s none of that obvious “saving the world from 1 bad guy” as a typical JRPG. Each character has their own story and it feels more like anime than other games. The demo allowed me to see at least 2 character stories, and they were both this way. At that point, I eagerly went and pre-ordered the game.

Imagine a world with 3D environments and 2D sprites. It’s very much like a PS1-era JRPG, like Xenogears. But it’s simpler and looks more like a SNES game with a 3D upgrade. There’s a lot of special effects and HD details, like more realistically animated water, sand, snow, and camera focus. Although, the latter seems to be fixed at the center of the screen, making things around your character look blurry. That gives it a nice effect that looks like the game is taking place in a cute miniature set. The game’s characters are particularly colorful. For example, one character is Alfyn, and he wears mainly green. Then we have a thief, who wears mainly purple. The next few characters seem to be defined by their color as well. This gives the game a really nice old school game vibe. Sometimes I see characters from today’s games wearing all black, or enough colors that they’re not as distinct as “green guy” and “blue guy”. However, the cities and dungeons are more toned down or less cartoon-ish.

The game’s story is independent to each character. (Spoiler free ahead, don’t worry! The first character I chose is Primrose. She’s a girl with a personal thing to solve. Avenging her father. She remembers 3 men who captured and killed him for reasons unknown to her. She’ll do just about anything to track them down and kill them herself. And by anything, I mean this game touched upon subjects I had never seen done before. Meanwhile, we have Olberic, a man who was once serving his kingdom as a knight. During a war, one of his fellow knights betrayed the country. The usurper killed their king, all for reasons unknown to Olberic, and escaped. As Olberic, you meet Primrose on the way to find this man and lend her your strength as you need hers.

“How is the story any good if the characters don’t interact?”

None of the 8 characters have anything in common storywise, except story events that can take place in the same town for 2 different characters, but overall this is an open-ended game in which you don’t have to see everyone’s individual story. So they have no personal reasons to meet either, except for the player to gather strength. This leads many players looking forward to this game to worry. “How is the story any good if the characters don’t interact?” It is indeed a unique thing, as stories from nearly any other game involve main characters that interact with each other. Usually, each of them is fleshed out. ESPECIALLY by interacting with other contrasting main characters.

In the end, this worked surprisingly well for a very simple reason: In JRPGs, main characters hardly interact with everyone else in the party to begin with. In this game, instead, each of the 8 characters interacts with those relevant to their stories, so Primrose interacts with her own story friends, and with her own story bad guys, and it gives the game a sense of pure and focused storytelling in place of forced interactions.

The music is of an excellent quality, as are the sounds and voices. But there are a few problems. They’re a mixed bag. There are songs in Octopath Traveler that I really find beautiful or exciting. However, sometimes, some music is too relaxed when I wished it was a little bit more energizing. So much so to a point that I can yawn hard as soon as I load my save file and appear in a place with an extremely relaxing song. Music is a powerful force, and it could very well put you to sleep as if it were black magic. But, music taste is subjective, and some may actually love this as well, but I hated it. And that’s a shame because this soundtrack is really cool to me when it doesn’t put me to sleep. The sound effects need to be a little different too. They sound like they fit in a more realistic game like Skyrim. However, the sounds aren’t bad at all, just kind of unfitting. The voice acting is absolutely incredible and fun to listen to. At first, I feared I would be annoyed by hearing so many voices happening in battle, but I got used to this really well.

One of this game’s greatest aspects: the combat. This game will not bore you with the Press A to win rule. You get to exploit enemy weaknesses here more than in typical RPGs, as a few small features are introduced. Enemy vulnerability icons and character’s ability to equip more than 1 weapon at once. This allows you to discover what enemies are weak against, and display it RIGHT THERE in the battle without having to study a menu and remember things next time you encounter enemies. This is a really good motivator to try different spells and weapons on the same enemy. You discover what they’re weak against. Or, you could Press A to win still, if that’s your thing! It will take a bit longer, but it’s not impossible.

The game also shows you your turns and enemy turns on a bar, much like Final Fantasy X, and this is also a really welcome feature. Also present is the break system, much like Final Fantasy XIII’s staggering system. You attack the enemy with their weakness a number of times, and you will break them for like 1 or 2 turns depending on how fast your characters are. All of these things and a few more combined make for one of the best and most entertaining battle systems in a JRPG.

…a Thief could remain a full thief, but you can give him the Knight class, and he will be a Thief Knight.

The towns have gotten a lot of gameplay elements not seen in traditional JRPGs either. You have your typical towns, houses, shops, bars, and characters to talk to, but you can also recruit almost any of them! Or fight any of them too if needed for a particular reason too! You can steal from people you hate. You can find jobs in this game too, as in, character classes. So each character can be anything, but only one character at a time. But each character already has their own class, and this is unaffected by their added class! So a Thief could remain a full thief, but you can give him the Knight class, and he will be a Thief Knight.

The game has a lot of side stories, and all of this is managed in a convenient little menu to track your progress, as is typical of games with side stories. My only complaint is that they’re not all doable as soon as you find them. It’s a minor complaint, but it can get on the nerves of some. They’re completely optional, but I always wanted to do them.

It all comes together in a nice formula that works well to make me want more, I was always looking forward to how the next town and story would be! However, it can’t get as addicting when a lot of the treasure you find is just cheap little things you can buy almost anywhere, and sometimes it can be overwhelming. There’s so much background and interaction that a single NPC can have in exchange for lots more of the same little things.