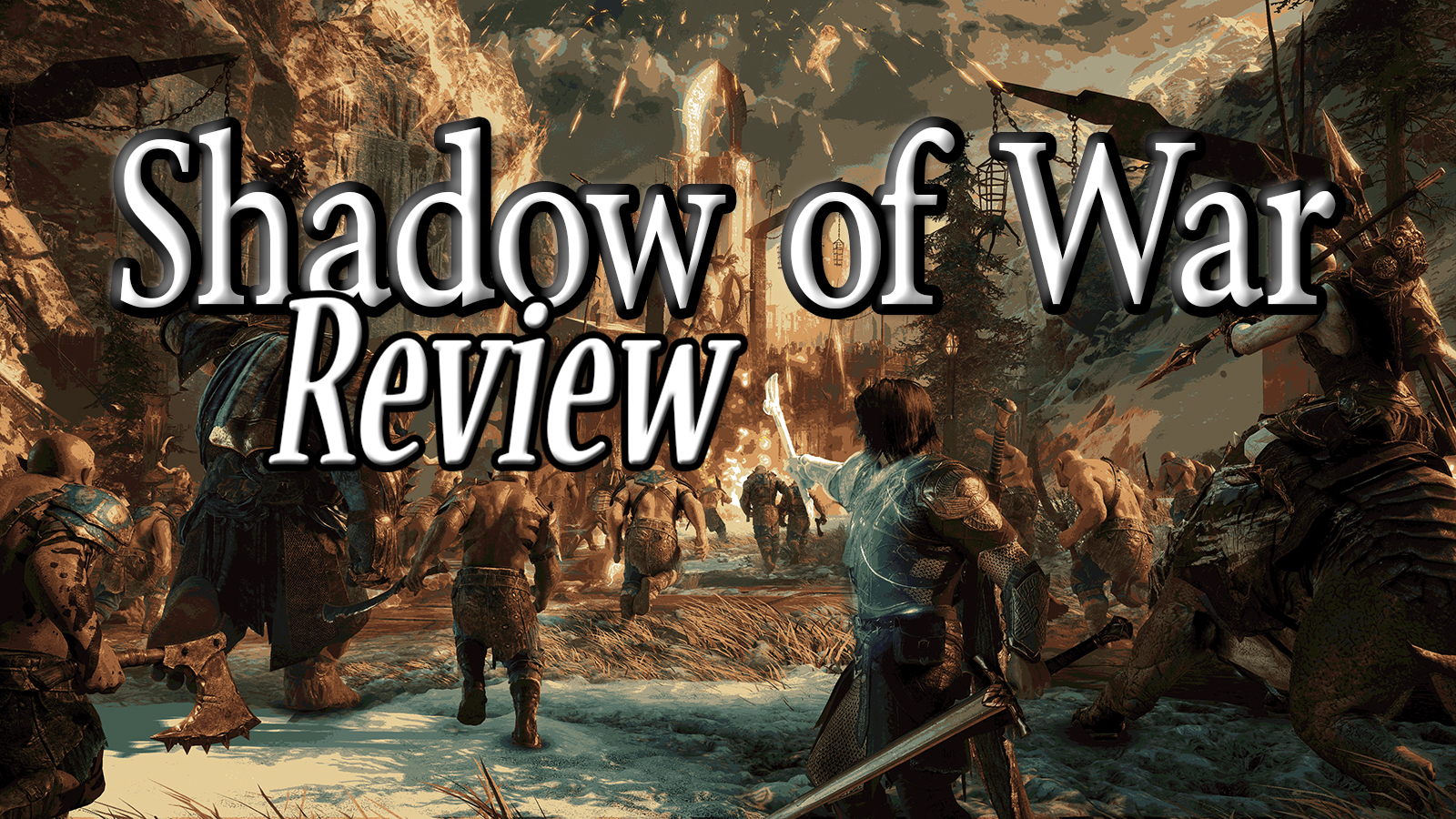 Shadow of War is the sequel to Shadow of Mordor, from Monolith Studios and Warner Bros. The setting remains in Mordor, with the time period being in between The Hobbit and Return of the King. After the wraith combo of Talion and Celebrimbor forge their own Ring of Power, they must combat the evil supreme being Sauron’s, forces, and essentially keep his influence within Mordor’s borders.

There are many visual cues and landscape setups that are appealing to the eye, especially from the sky. Talion has a facial animation update, that is neither better nor worse than his original look. Celebrimbor who is seen when utilizing his talents, is also fluid, albeit way more aged and “ghost-like” than before. The fact that his lifeforce has been poured into his Ring of Power is evident in his aged visage. The movement patterns of living things are very believable, from the caragors, to the dragons, ranger, and even from the elf inside the ranger, such as when a simple double jump becomes the starting point of a three orc headshot combo as time slows perfectly to achieve the goal. Not only are the movements ideal but attention to detail when standing still is also a feat well captured. The orcs you encounter within the army all seem very distinct and unique from each other, even Orcs within the same tribe, such as “Dark” and Mystic”.

The story follows the tradition of letting one play as they see fit. The progression of the game is very linear, however the open world allows for “grinding” which one might find necessary in between certain story missions. New allies enter the stage, and one familiar face is also seen lurking around stone passes inside Mordor. Certain Orcs including your “Nemesis” will follow you throughout the story. Your progression of the game will actually matter when considering the online content. In fact, online isn’t suggested until the latter part of the game, as your in game player level will directly matter when defending and attacking online player’s forts. Not only will your level matter, but the Orcs in your army will as well. Elements of the game that are emphasized in the latter half such as Orc pit battles, are introduced with subtlety, and each layer plays an important role within the game.

SOW uses the controller speakers to great effect during cutscenes and other appropriate times such as domination. Whether flying on an orc, riding a caragor, or even during a dramatic cutscene, the sound effects and overall tone will be appropriate. Discussion of your exploits within Mordor will also be noted by grunts and captains alike, which makes for a realistic setting.

This game has a very good blend of its elements. When first starting, less powers means you will most likely use stealth and environment aids such as bait and Morgai fly nests. All throughout the game it does feel like an honest war. Only unlike its predecessor, you eventually feel like you have the command of an army. Each fort has its challenges, and because the captains all have different weaknesses, one will find themselves planning for those weaknesses. In one instance a target I came across had several immunities: fireproof, poison-proof, etc; but only one weakness: ranged attacks. The allied Orcs I had recruited died one by one in battle, and in fact I suffered a betrayal on the battlefield by my personal bodyguard. All of this had to be assessed with in real time, and that was one of my most enjoyable experiences because of the versatility. After sinking some hours into it, one will truly feel more powerful as skills become unlocked in later levels.

In an age when gamers need to immediately achieve something, this game is refreshing. Playing on Nemesis mode, where all your combatants evolve, remember, and in some case even return from the dead, makes battle preparation an actual necessity. Although even then you can still be caught off guard by a betrayal or enemy reincarnation. Plans were executed well; improviations were also executed.

The Wyrms, (conquerable dragons) made traversing a map or battlefield faster and much more enjoyable as it basically worked like a helicopter would in your favorite shooter. The dragons breathed fire, and nothing says ouch more than live cooking your worst enemy on the battlefield.

Pit battles were a unique element added to help facilitate the growth of your army, while also allowing you a space to get a better orc if yours is defeated in combat. Watching your favorite orc win rounds at the pit is oddly satisfying. While level is a strong indicator of a potential victor, it is not always the deciding factor; in fact I saw some eye-raising battles where the victor was not expected at all.

This game is blended well. One thing I did not mention was the microtransactions, and I mention them now because is in no way shape or form do they deter you from any fun. Having boosters or extra Orc followers helps more for the multiplayer than anything. There are those that argue they wouldn’t want to spend over 70 hours to beat a videogame. For those who feel they need to immediately finish something, either play on easy or pick a different game.