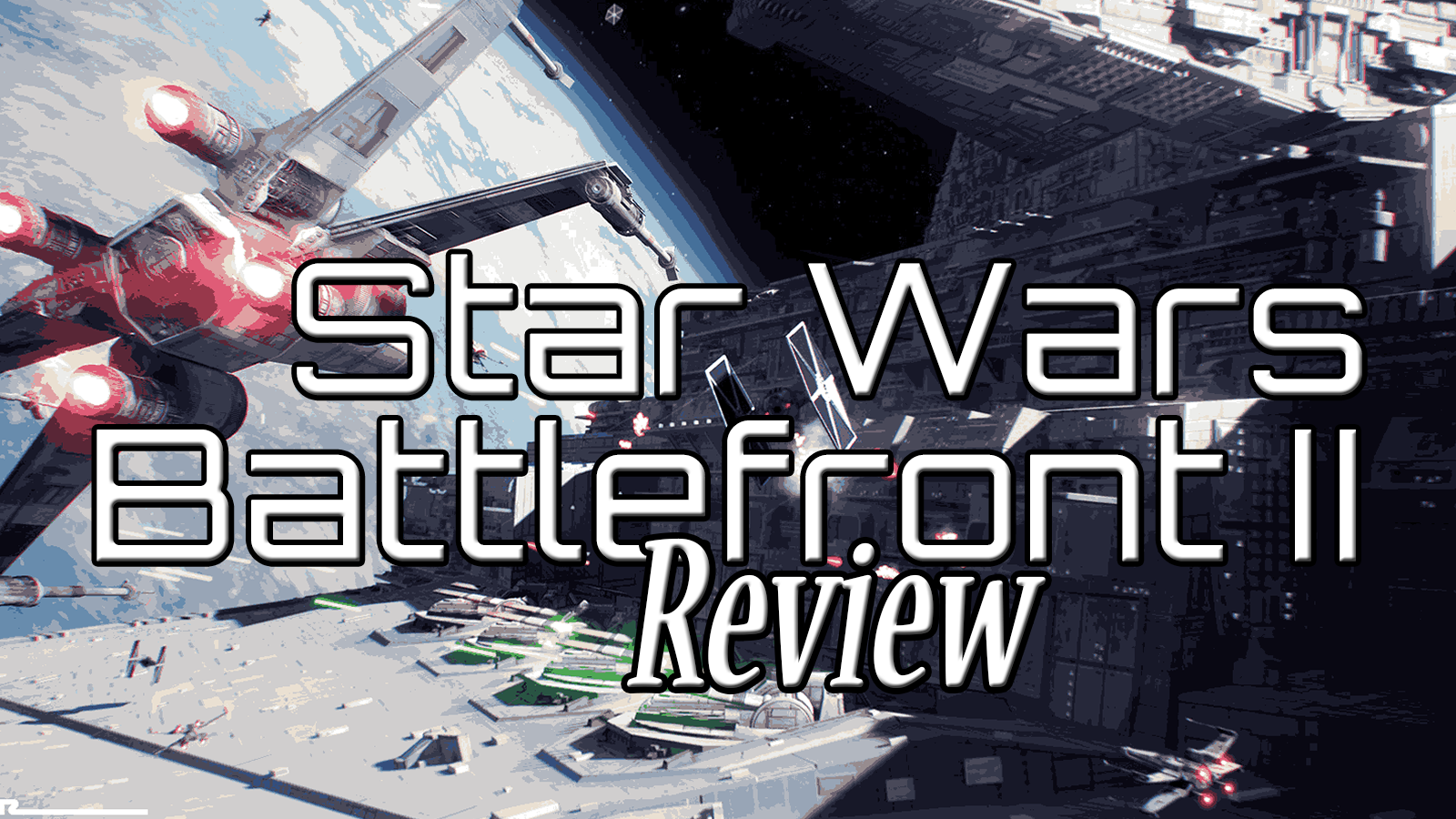 Misses the mark harder than 100 stormtroopers.

Star Wars: Battlefront II is a sequel to 2015’s remake of the classic Battlefront (2004) series originally released for the sixth console generation. The new Battlefront II was developed by DICE Studios and published by EA Games. Originally, the first iteration of this remake series came into a bit of controversy when it turned out that the core game only had 4 maps and that the rest of the planned map releases would only come with a fifty dollar expansion pass. Obviously, EA have learned their lesson because there is no expansion pass for Battlefront II. It’s all just water under the bridge now, right?

I was always wondering where the missing assets from Mass Effect Andromeda ended up and wouldn’t you know it, Battlefront II had them the whole time, they were just hiding it in the single player campaign. That goes double for Iden Versio who was one N7 decal away from being a Commander Shepard stand-in. But the graphics were all good. Very good in fact, featuring some inclement weather on multiple planets. There are also some lovely high res textures and animations. The ability to switch between third and first person views also augments the experience, letting you play the game as you see fit (unless playing as a hero). The garden world you go to has rich vegetation amongst its vast stone walls, which gives it a really pleasant look. But seriously though, there were several sections of the game that looked suspiciously like they belonged more in the Mass Effect universe than they did in Star Wars, it’s weird.

The plot is so bad I’m going SPOIL IT. Skip this section if you want, but seriously, I’m doing you a favor. So as Iden Versio, you’re in a spec ops unit called Inferno Squad and you start off after the Death Star II explodes. The Empire, licking its wounds, has the perfect plan to recoup its losses. They decide to just launch an all-out attack on a planet that is loyal to the Empire. Yes, the Empire’s great plan to restore order is to destroy one of its own planets with some sub-par miniature super weapon they just had laying around (and only visually appears to cause super bad weather and nothing else). That’ll show them who’s boss, right? So, since Iden Versio actually has a brain, she goes rogue and flees, only to be captured by the rebel alliance. The rebels, executing a great amount of scrutiny, politely ask her if she’s an Imperial spy and after saying no, determine that she’s trustworthy and instantly give her access to pilot a snazzy new X-wing to help out the cause. I mean, no, she wasn’t about to betray the only people willing to help her, but the change from treating her as an enemy to an ally happens in less than a minute of actual game time. What follows after is a series of very poorly veiled excuses to go planet hopping in order to stay one step ahead of the Empire to find some MacGuffin type thing that was so utterly unmemorable that I finished the game no more than a couple of days ago and already don’t even remember what it was. The series ends with an all-out battle between the rebels and Empire within the atmosphere of Jakku, and if you’ve seen The Force Awakens, you know how that will end. At the end, Kylo Ren enters someone’s mind to find yet another MacGuffin, hinting at a possible sequel to the single player story down the line. But please, please don’t do that. Don’t ever make a Star Wars campaign again, DICE. If you’re up for another Mirror’s Edge, that would be stellar, but stay away from Star Wars.

Well, the audio has one thing going for it: at least a few of the blasters sound authentic, as if grabbed directly from the films themselves. But this is outweighed by that bad. Several points of the game have token moments where you get to play as the “Heroes” from the Star Wars canon, and pretty much all of them are piss-poor attempts at sound-alikes with Kylo Ren possibly being the only one that sounds legit. The rest of the voice acting is pretty ham-fisted, which would have been okay had the game not been trying so hard to get you invested into its seriously laughable plot. Anything new doesn’t sound great either. There’s nothing memorable audio-wise about any of the weapons or explosives, and if one were to hear just the audio, the multiplayer matches would be almost indistinguishable from a Battlefield title, save for the pew pew of the laser weapons. The score is more or less a John Williams sound-alike, but just as with the rest of the game, it doesn’t do anything special or unique. It sounds a lot more like the Star Wars music was fed to a robot on punch cards with instructions to do something similar.

You know, when I’m playing a first person shooter and I’m up close enough to punch someone, I expect to land a hit that at least damages the opponent if it doesn’t kill them. What I don’t expect however, is to teleport two meters directly through them as an overly long punch animation unloads and then take an additional second or two for an asthma inhaler dose before I’m allowed to move again. Gameplay during the campaign was just okay even at its absolute best, with almost all of the levels simply being re-purposed multiplayer maps that will yell at you if you go too far in the wrong direction, even if you’re trying to go somewhere to preempt an enemy attack (like seeing a drop ship landing). The enemy AI is basic at best with many NPCs being capable of landing shots or charging you down, but at other times seeming to almost run into your line of sight on purpose. I even experienced an NPC getting stuck and forcing me to hunt him down so an event could progress. As for multiplayer, initial impressions were optimistic at first, until I realized how long it would take me to play with a gun I don’t like just to get an SMG. I didn’t like that, so I tried to stick with playing as an officer with one of the worst weapons in the entire game, but some decent abilities to bolster friendlies with a stat boost and the ability to lay down a turret. But round after round, no progress was being made, as even playing the objective didn’t feel rewarding. We all know why that was a problem…

Now, normally, I like to make it a policy of this site to demerit a point from the score for egregious lootboxing, but even without any lootboxes, player progression is completely ruined. Offering no way to advance without the help of the now in-game-currency-only crates, they still stave off having improved versions over regular abilities, and that’s just not very good design. There’s no sense of progress when you do well and you’ll be stuck for a long time dealing with guns and abilities you aren’t going to like. Not to mention that just getting into the clusterf*ck of a system that the star cards set up is a total mess and a half. Even worse are the loading times. Either jumping into the campaign or trying out a few of the game’s “arcade” scenarios takes close to a minute, if not more. Which is a shame, too, because the arcade challenges are little more than just uninteresting bot matches. The lag was also incredible, as in “I can’t believe a game with a budget this size has this much lag!” Upon re-reading this review, I realized I forgot to mention the air combat. It sucks. Nothing else to say on that, I’ve played many other games with air combat and the amount of times it was forced into the single player campaign and how utterly useless it is in multiplayer is astonishing.

Star Wars: Battlefront II was a game I wanted to believe simply wasn’t as bad as everyone was saying, and that people were just exaggerating it’s problems. Little did I know that it would be one of the worst games I’d play this year. Even if the loot box controversy hadn’t been a thing, this still is a poorly made game with zero charm, enthusiasm, or gusto. Designed from start to finish to be nothing more than a cash grab (which backfired tremendously), this game is just a wet fart on the video games market. Purchase this game only if you are a hardcore Star Wars fan and the game is in the bargain bin.

Our lowest score to date!