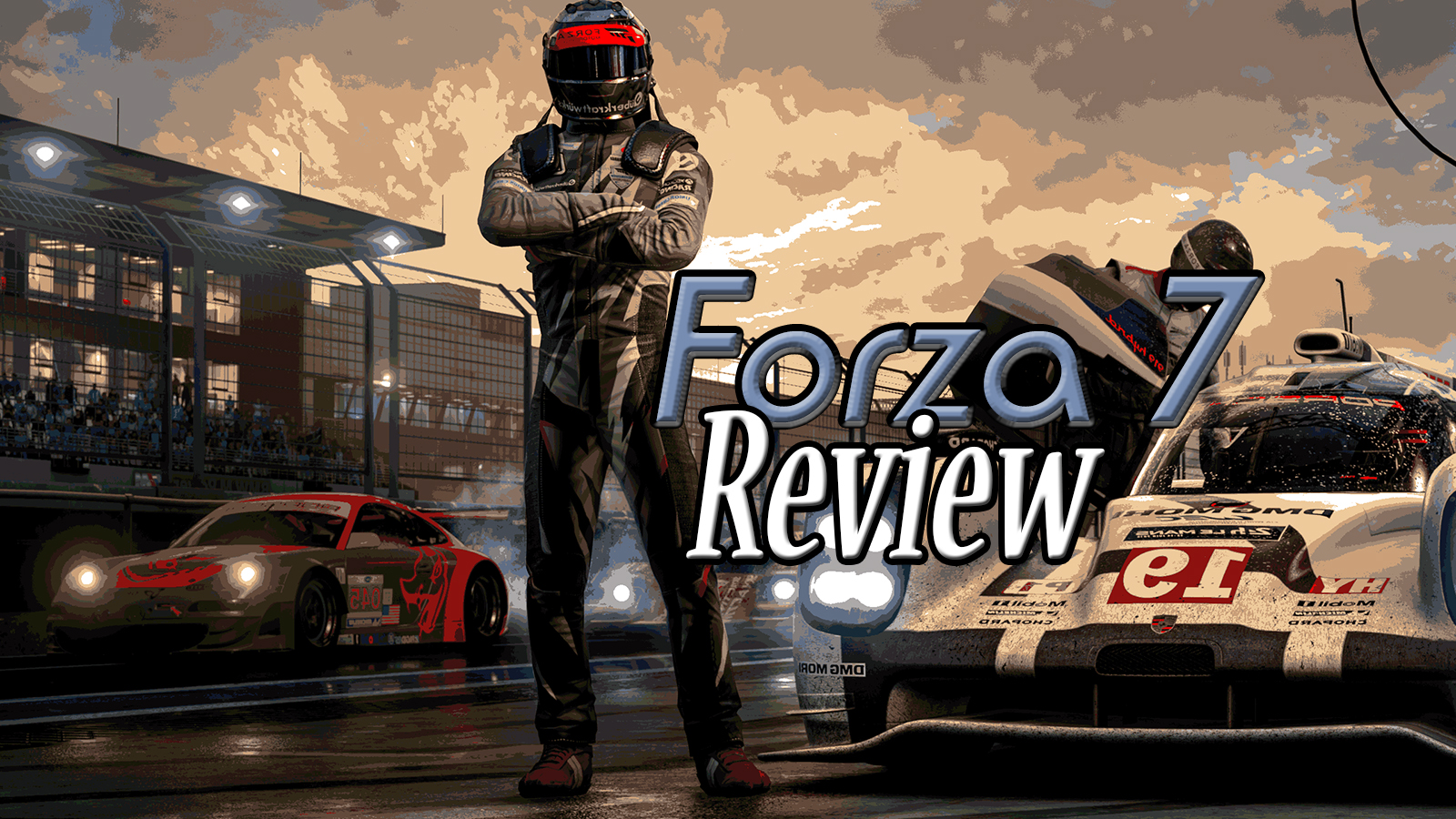 Not the luckiest of numbers this time around.

Developed by Turn 10 Studios and published by Microsoft, Forza Motorsport 7 is actually the tenth entry in the Forza franchise. It’s hard to imagine that a mere racing game can serve as a tentpole in terms of being platform exclusive, but when you’re working for Porsche automobiles and you decide that the best way to announce your new car is to showcase it during a video game announcement in LA, you are talking about some very serious prestige.

It’s a strange situation this game is in. Here, I have a game that is certified to run in 4K at 60fps, but that’s on a console that isn’t out yet. Playing this game on my original Xbox One almost feels like playing a preview build in that regard. “Hey, this game is going to blow your mind…. In November!” the game nonverbally taunts. But it shows in little details too. If you go back to when gaming transitioned from SD to HD, a lot of games meant for HD didn’t show up that well on your old SD monitor. This was especially true with fonts and icons often being hard to read between those generations of video. It’s the same for this game; there are definitely some holdovers from what’s supposed to be 4K that make the video seem a little bit off. With all that said, it still looks good above all else. I’ll add an asterisk here as I’d like to see just how good the graphics are when the Xbox One X drops.

So yeah, racing games don’t have a story, so for this section, you heavily lean on incentives to progress. In most games, it’s plot. In racing games, it’s encouragement to be the best. This doesn’t always work so well for Forza. The game made a brilliant opening impression by having you race through three specially tailored racing experiences before jumping into the campaign. It’s back to regular old championship trophies to make your way to the end. Problem is, sometimes if you don’t win every match you will find yourself participating in a championship you don’t really want to do but you have to complete just to progress. Even if all you need is 50 points, you have to finish the championship to progress. The variety of challenges is decent, but sometimes I think Forza should just make a sort of “tour de force” of specially prepared races, more than just three, to cruise through before jumping into championships. It’s also odd that the progression system seems to be built on building your car collection instead of winning races.

Like every other Forza game, special attention has been taken to make every car you ride sound like the the way it should sound in real life. The audio changes based on being in the cockpit or outside, like it should. Collisions sound like they should and are more visceral than ever. The generic rock music that plays between races is just okay, but to be honest, it’s sort of a welcome change. As much as I love the 5+ EDM radio stations in the Horizon series, this game’s music is refreshing. Not that the soundtrack matters a whole lot when you’re actually racing. This is a racing sim, the roar of the engine should keep you going just fine.

There are several nags here and there. The difficulty slider for the “drivatars” seems to be a little unbalanced. I am not the only person who seems to be experiencing wide jumps in difficulty in what should basically just be marginal changes with each tick up on the scale. I found the best pairing I’ve gotten so far is “Above Average,” which is one tick above the normal difficulty. Yet in Horizon 3 I could get away with 3 ticks up and go all the way to “Pro.” I’m not sure if this is a balance issue or maybe it’s just been too long since I’ve played a racing sim, considering I skipped Motorsport 6. Still, although frustrating, the challenge of the game is all the more rewarding when you do click with a car you recently purchased to race with. Then there’s the “free race” mode which was needlessly confusing to set up and was very restrictive. Not allowing you to play with other cars you want to just take on a test drive isn’t really a feature. For once I actually dabbled in the “rivals” mode, a series of time sensitive special races and had a bit more fun with that.

This game has quite a few killjoys. There’s the now infamous “Prize Crate” issue wherein they want you to spend your hard–earned money on randomized loot boxes instead of buying cars, but they also expect you to buy more cars to level up your car collection status anyway. That also gets in the way of things, because buying a car is no fun at all. In prior games, you’d get a good look at each and every car available to purchase. Here in Forza 7, the the car buying screen looks like a messy stamp collection you have to rifle through. The small font and small thumbnails for the cars don’t help. Neither do the random locks on certain cars that can only be unlocked after completing an unspecified milestone. The aforementioned bit about having to play a championship you don’t want to in order to progress really is less than ideal. Even with all the gripes I have, I do keep coming back to the game. The game is so well made, it’s just weird how your progress is impeded by some questionable design choices. But even after all of that, there were still dozens of moments where I was on the edge of my seat, engaged in the race, and may or may not have damaged my right trigger in the process.

Forza Motorsport 7 continues to express the pedigree the game has, yet it’s got a handful of issues that are too big to ignore. Though I didn’t personally have any problems at all with the Prize Crates, the decision to put it in is baffling considering it doesn’t seem to have a whole lot of impact on the game. Turn 10 has done better than this in the past. I’m not angry, just a bit disappointed. Perhaps Gran Turismo Sport will steal back the spotlight? We’ll find out later this month.