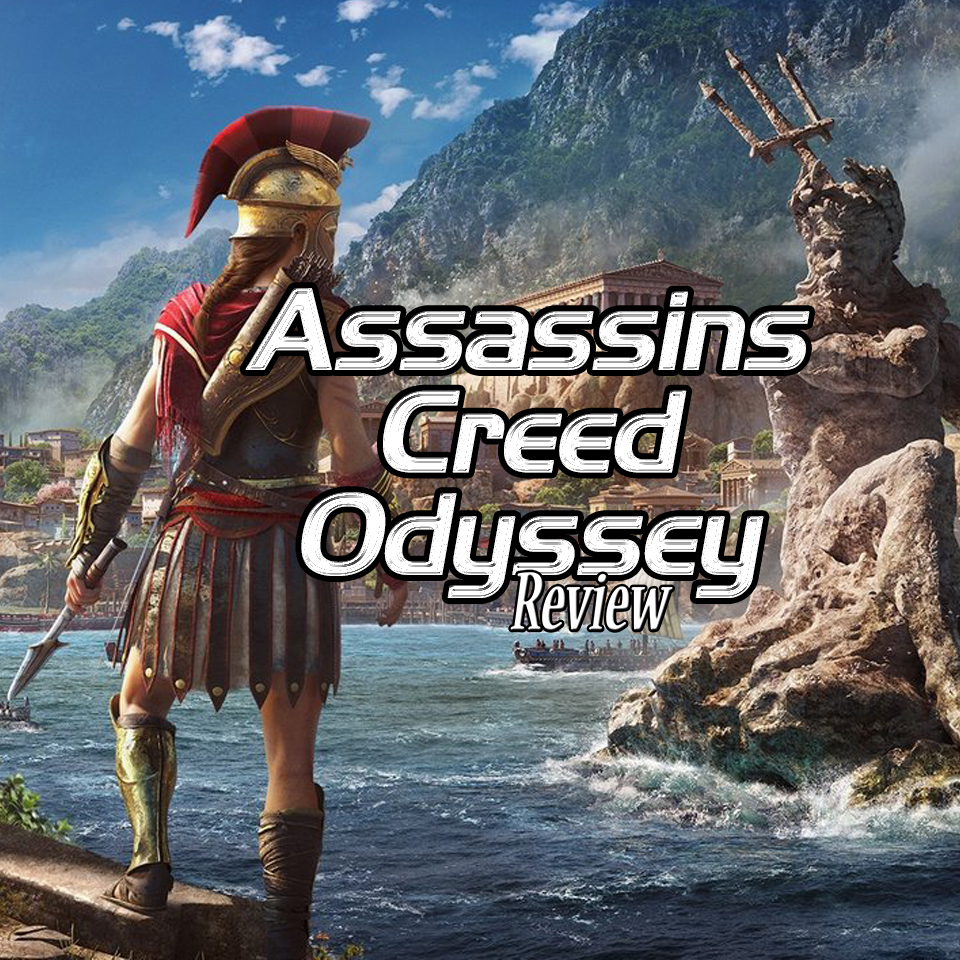 By now I’ve found a missing person I’ve been looking for, killed a few “Templars,” found the lost city of Atlantis (sort of), and now have to win a war and compete in the Olympics. That’s right, I have four main quests to play on top of all the side quests I’ve been accumulating. The islands you can sail to in this game always have great side-stories that are totally optional. Now that I’m 44 hours in, I can safely say I might be done with one third of this game. Maybe. It’s possible. Give or take. The unfathomably popular Stealth/RPG (stealth optional) series developed and published by Ubisoft is now at its tenth main series game. Assassin’s Creed Odyssey adds even more elements to make it an even further evolution from the roots of the franchise.

This game is absolutely stunning, even on my sub-par Xbox One S. Stable frame rate, great coloration, variety, it’s all there at the baseline for a good looking game. What makes it look better is the sheer marvel of the whole thing. Ubisoft didn’t just make a few cities in Greece for their game. They made ALL OF IT. And it feels like they did, too. Everywhere you go there are gorgeous busts and statues, temples, altars, and residences that are all fully realized. I want to know where they got the time machine so they could take photos of Ancient Greece and use it as references for the designs. It’s the empire in all its glory. An absolute marvel to stand at the top of a mountain and look in every direction. In the distance, you can see all the ships in the water going about their business in real time. You can see other landmasses across the water and know that if you can go there if you want to. There… might be a few minor hiccups and glitches in some of the animation, but that is literally the only bad thing I can think of. And the sheer beauty and aesthetics more than excuse that.

I admit, at the beginning of the game, it’s hard to get into the plot. You are not really sure what you are supposed to be doing. The grand scheme of things is boiled down to simply leaving your home island to go on an adventure because you’re sick of being at home. There’s a goalpost, sure, but it’s far and not too tantalizing. This is definitely the type of game that you have to spend time with to get into the swing of things. The overarching narrative becomes far more clear well towards the 15-hour mark of the game. Once it does hit, it does so with ruthless efficiency. The way the game’s campaign works is the prime form of dangling the carrot in front of the player. It’s hard to imagine you would run out of things to do after being far enough in the game to really open up to the “go wherever you want” phase. Four main storylines. Every location story has its own stuff going on. I was on an island where I helped a young child make some friends while also meddling in “The Bachelor: Greece Edition”. Then I had to overthrow an evil ruler running another island ragged while hooking up with the sexy leader and her boyfriend if I so pleased. Hell, I had to take part in a gay orgy with a goat just to advance the plot. I’m not even remotely joking. A goat was involved. And Sokrates turns out to be the world’s first internet troll. Good times.

I’m going to mention one prevailing bug in the game that hurts the audio quality in a way. On a regular basis, around twice or more per hour, when you talk to an NPC,  you or the character will interrupt each other mid-sentence and say lines on top of each other. It’s annoying. Some of the secondary characters don’t seem really committed to their parts, while other characters go full ham. The voice actress for the soundtrack gets old really fast. With such a big scope, I really, REALLY get tired of hearing the same music every time I open the menu. And the main “Assassin’s Creed Theme Leitmotif” is sprayed over every other song too. It gets old fast. I may eventually have to turn the music off and just play my own tunes or a podcast over it instead. Which would be great because I’m in the perfect setting to put my ｖａｐｏｒｗａｖｅ collection on full blast. But still, this is just the soundtrack I take issue with. The actual sound FX and quality of sound is tremendously satisfying. I will give the full grade because I’m being too personally harsh on the OST, even though it’s objectively decent.

There are many on the internet who say this game has become too action oriented. Sure, the formula has been changed, but it’s been heading this way for a while now. The fact is, you can still play this game stealthy if you want to. There are just more rules to it because you can’t assassinate people who are at a higher level than you. The majority of the EXP you earn will be from completing quests, not kills. So if sneaking in and out of an enemy base is your idea of fun, there’s plenty of that to be had. Yes, open conflict is a bigger part of the game now. It’s the play-it-your-way model that prevails. But everything in the game works and does accommodate for all play styles. Shoot everyone with a bow, bludgeon people with a hammer, death from above, and Sparta-kick your enemies of a cliff. There’s plenty of gameplay to be had here, as iterated above.

Ship combat makes a return to the game and I boldly welcome it as a delicious appetizer to sate my hunger for a good pirate game until Skull & Bones arrives. But that said, it’s a bit more minimalist than it’s predecessor, as there was less maritime war tech in this setting. They have also implemented a mercenary hierarchy that mimics Shadow of Mordor’s Nemesis system, but it is also bare bones by comparison. Hunting down a devious death cult is the replacement for the assassination quests, but you have to put in the legwork to identify who they are. There’s also a conquest mode where you can take part in a big fight between the Athenians and Spartans. You can also change whichever team you’re on for every battle. You can also fight mythical beasts from Greek folklore, because hey, why not? This all may make it sound like it’s quantity over quality. And to an extent, yes it is. But set in this game, it’s actually not a big issue, it just works.

And now for a bit of controversy. Ubisoft has no problem putting expensive microtransactions in their fully priced games. It gives them big money, they have a right to. However, as an experience, they nearly broke their goodwill on a portion of this game. That’s the progression system. In order to level up or afford things, you have to do more than just missions to get enough EXP to progress. You’ll have to do a lot of mundane-out of the way stuff like exploring caves and attacking small camps at question marks dotted all over the map. I found myself in a position where I was two levels too low to progress through the game because the game is harsh if you are under-leveled. Ubisoft remedied it by offering a buff that will get you 50% extra EXP and money for the whole game, including new games. You have to at least buy the 20 dollar helix credits pack to get this. If you don’t, the game can get very grindy. Plenty to do is one thing, being forced to do everything is another. I caved and bought this buff, and it feels like this is the way the game was supposed to be played. It seems as though this was intentionally done to goad extra cash from the player.

I am willing to forgive this transgression because it was on me to make that choice in the end. I could have bucked up and cleared out every single icon on the map to take the game nice and slow. But, be that as it may, I cannot stop playing this game. Even with the buff, I did manage to get myself into another situation where I was under-leveled. But I kept playing and playing and playing. I told myself I had to stop at 11 PM, then 2 AM rolls around and I’ve conquered another city. I am willing to accept that the price I paid to make this game more enjoyable is worth it because of the amount of fun I’m having with it. Before tax, I paid a total of $68 for the game with the helix credits. That is an acceptable price for this game. I don’t know if I will finish any time soon, and I’ve had plenty of time to play.