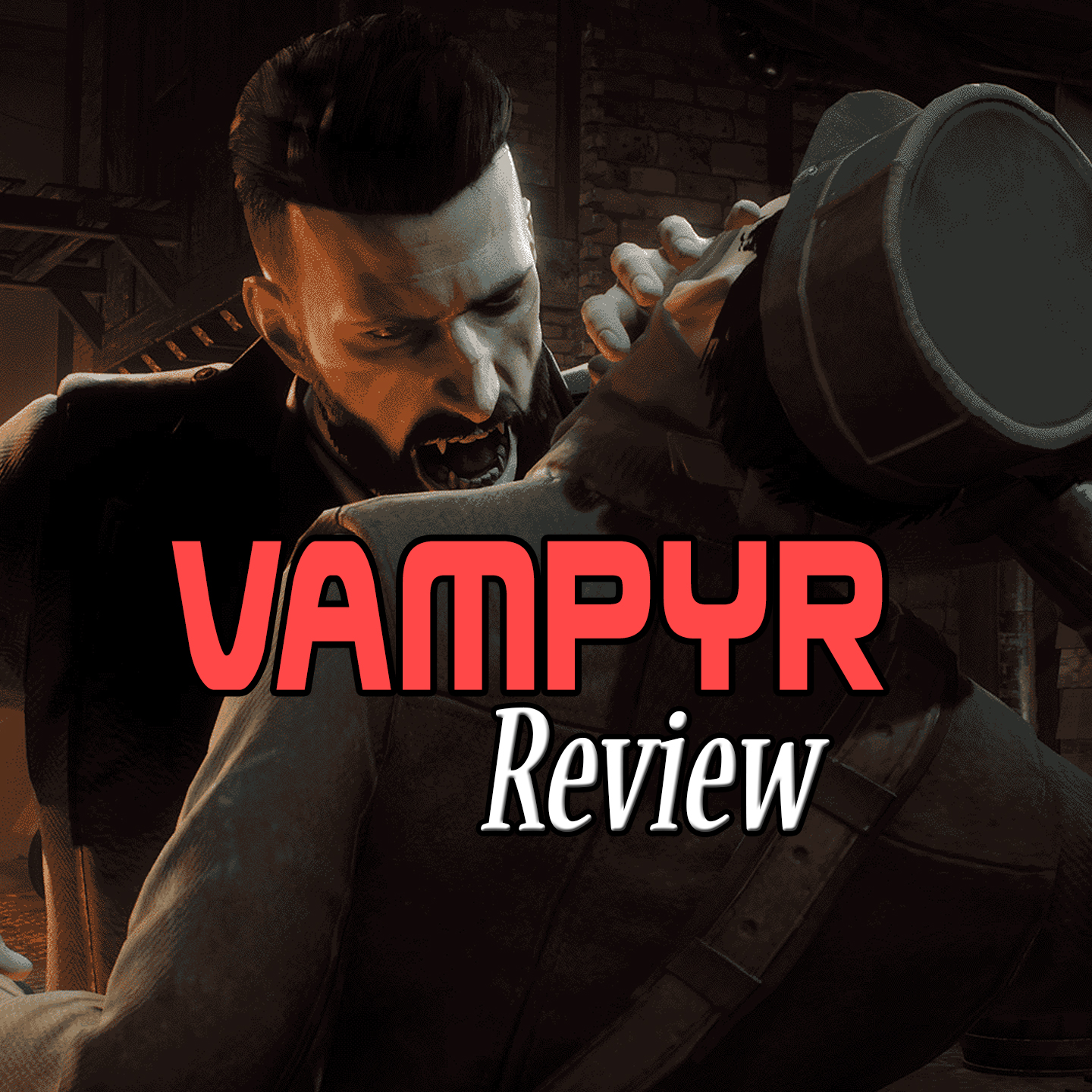 Vampyr is an action-adventure game featuring melee combat and advanced character interaction. It was published by Focus Home Interactive and developed by DONTNOD Entertainment, makers of Life is Strange and Remember Me. You play as Jonathan Reid, a very successful doctor who specializes in blood transfusions. In an ironic twist of fate, he becomes a vampire (called Ekons in the game, and no, the spelling “vampyr” was never used in the entire game) and becomes entangled in a mystery. The city of London has been struck with overwhelming cases of Spanish Flu. Your overall quest is to simply cure this disease plaguing London, but that’s not all. While beating crazed vampires with a large stick can be fun sometimes, you also have to help the citizens of the city. You do so by traveling to safe spots, talking to people, learning about them, and treating them for a variety of medical issues. The other twist? You get EXP from doing quests, but if you find yourself having a hard time, you can choose to feast on anyone from the populous. It’s not that simple though, killing the wrong person could result in destabilizing an entire town if you’re not careful.

DONTNOD have never really done great in the graphics dept. Their best work comes from Life is Strange, but that’s only because the art style masks the lower texture details. This game has functional graphics at best. The city streets are full of nothing but brown, grey, and dark red as if the game took a page out of the last console generation’s “realistic” trend. Reid himself is very well detailed in the amount of care that has been put into his appearance, but he is the only exception. Everyone else either looks passable at best, but more often than not they look bad. Imagine facial textures that are worse than Mass Effect Andromeda. Actually, that goes double for character animations too, as characters will sort of sway back and forth unnaturally while you speak to them, and lip sync could do with some improvements. The lighting effects seemed to just consist of very flat looks, and the shadows are very poor if they even bother to show up. I tolerated these dull graphics for the entire game but there wasn’t a single moment where I was impressed with anything.

I’m having a hard time with how I should score this section. The main plot is interesting enough, and if you’re a big fan of vampire stuff and in-game lore, there’s plenty to dig into. The real talent on display is the NPC interactions. In your travels you will meet people who are out at night going about their business. You can approach any of them and talk to them about how they feel, what they do, and if there’s anything you can do for them. And yet it gets deeper still, as there are special dialog options for every character that you can only learn either from gaining their trust, talking to others, or eavesdropping. Once you’ve unlocked these secrets, you can compel a character to answer questions about the information you learned. You’ll find yourself going back and forth between NPCs talking to them as you learn more and more and complete tasks for them.

This is one of the few games where helping out characters who can’t help themselves has a legitimate reason. The city streets are very treacherous and filled with all sorts of fiends, so most of the people are justified in asking you if you can help out. But all that said, there’s a bigger problem at large, as the quality of writing varies greatly from person to person. You’ll find characters with astoundingly hidden depths, and then you’ll talk to people how are cardboard cutouts. The other problem is the flow of logic when you talk to people. Also, the majority of the plot in this game is delivered by having stiff one-on-one conversations. You run into the same problem you had with games like Mass Effect 1 where the dialog options you have usually fall to “TELL ME MORE ABOUT X.” You can also have a character say something very very distressing in one interaction, and then immediately go back to their default mood if you ask them basic questions. Overall, the case here seems to be a solid example of quantity over quality, and your mileage may vary on this fact.

But, here lies the other problem with the plot. The quality of voice acting also leaves room for a lot of improvement. While core characters are relatively good with their delivery, the same cannot be said of all the NPCs. A lot of the characters have very wooden dialog and can sometimes sound like they were simply rehearsing the lines and but accidentally made that the final cut. A lot of the accents don’t sound genuine, and there were even a couple of times where their accents slipped into something else. But that’s enough about the characters. The game is redeemed with a really rich, soulful soundtrack that matches the aesthetic of 1918 London, while also not being afraid to add in some more modern touches. The combat also has some satisfying sounds, with blood splat, thwacks, flamethrowers, and gas guns all sound exactly as they should.

As said before, the game revolves around talking to people, healing, and completing investigations. At first, the doctor treatments were interesting but it soon became tiresome due to an interesting but very stressful game mechanic. Before that, let’s talk about the combat. It’s a bland, slow and deliberate system with some sluggish reaction times to button presses and seemingly unfair fights that are based solely on numbers. If you’re level 15 and you face someone at level 18 or so, you’ll find that no matter how hard you hit them, nothing tends to hurt them until your level matches theirs. This is especially true of bosses, who have a mountain of health and are relentless. I haven’t had boss fights this bad since Deus Ex: Human Revolution. The melee itself is a generic take on the Souls style, but it simply lacks the depth and response that makes those games so great. What’s worse is if you are under-leveled, you have to do a load of backtracking to find a place to level up and then make your way back. You also do not get your health syringes or bullets back when you die from a boss battle. If you used all of your health packs you are shit out of luck.

And here comes the interesting part. Leveling up. In order to use your XP to upgrade abilities, you need to sleep. Find a bed at a hideout or return to your room at the hospital and go to bed. But when you sleep, the next day arrives. Anyone who was sick and untreated will get sicker, people you healed will get better, people who were previously unhealed become sick, and any action you took in the district that deeply affects that location will take place. That’s right, you basically have to bank all your experience points and make sure everyone in the four boroughs of London are nice and healthy before you take that nap.

Sitting back and diving deep into the character interaction is fun and all, but this game is not without a plethora of killjoys. Loading times are really long, where launching the game will send you to a black screen for 20 seconds. You have to wait for certain interiors to load and that takes a long time, sometimes nearly a minute of waiting. Dying also drops a really long wait time on you. Oh, and if you run too fast across town, you’ll get a freezeframe loading screen for about 5-10 seconds. That, combined with the crapton of backtracking you will be doing doesn’t help. Especially because there’s NO fast travel. Granted, the map isn’t too large and once you’ve run around the whole world enough (and you will), you get to learn the routes without having to consult the map. You’ll need to know the map and the community screen as you’ll also be running all over the place to make sure everyone has been healed before you rest. Again, the tedium of facing down boss fights will bear down on you, often leading to frustration as you must make your way out and then come back just to fight an enemy that has a higher number than you. But, the interactions are still fascinating in their own right.

Vampyr is a deeply flawed game, yet somehow I could not take my hands off it. Up until the day I decided I wanted to beat the game as fast as possible, I was pretty engrossed in the world this game offered. Something, I’m not sure what, just kept me coming back again and again, playing it for long stretches as I did everything in my power to help everyone. Or at least I did until I needed to beat the game quickly and just decided to kill everyone. But fancy that, interact with an NPC you don’t like? Get the instant gratification of killing them. There are a lot of personalities here, and you will definitely find some people kill-worthy. This is a low scoring game but it’s one of the best low scoring games I’ve played in quite a while.