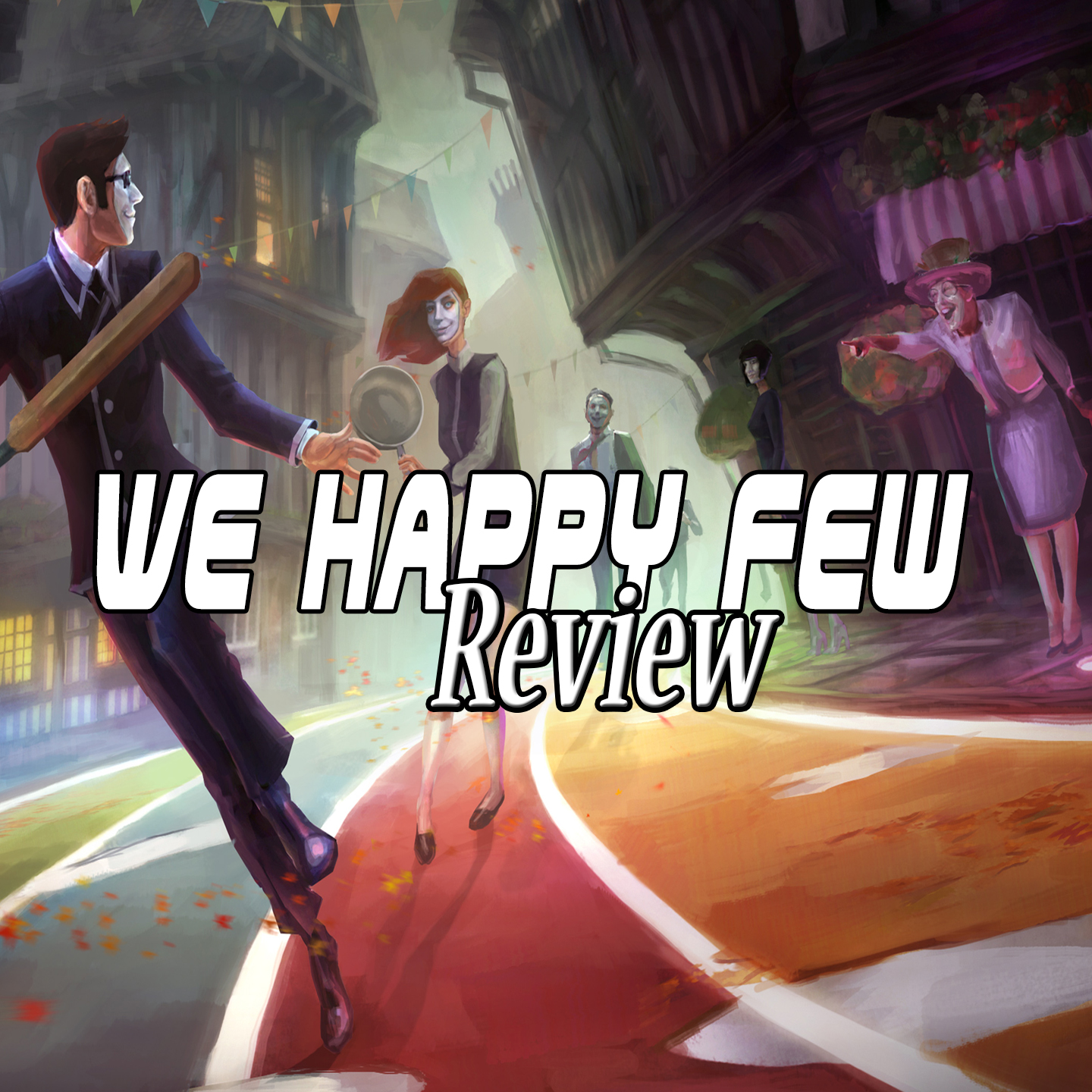 Not so happy too.

We Happy Few is a survival-oriented stealth adventure game developed by Compulsion Games and published by Gearbox Publishing. It is an unusual game that drops you into a bizarre world. One that will take you between two different types of zones, separated simply by whether or not people use to take a drug called “Joy”. If you refuse to take your medicine, you are thrown out of the city and have to live in the garden district. The game focuses a lot on the perception of your interactions with people. There’s also a system where you need to make sure you are fed, hydrated, and rested. Otherwise, you face severe debuffs that affect your ability to run and fight. The game was delayed many times but eventually released it. The game was originally funded via Kickstarter, with over 7K donaters. It got a huge promotional jump when Gearbox scooped the game up to publish it.

The appearance of We Happy Few is is another game with a certain stylized, cartoonish design. People have bizarre body to head proportions and some enemies are very tall. Everyone’s face looks like it’s been physically sculpted out of clay, and that’s on top of the mask everyone is required to wear. There are also moments that change the scenery when you take certain drugs. The enviornment also changes when they wear off. When you take Joy you get a double rainbow and it does go all the way across the sky. But beyond that, there are several graphical hiccups. Some textures look very hastily made. Other times, texture pop-in issues arise. However, most egregious is the amount of copy-pasting done to the world.

This game’s campaign features procedurally generated environments, so no two playthroughs are alike. I haven’t seen a game utilize this feature quite like this since old Xbox classic game, “ToeJam & Earl III”. Yes, it’s real, I played it. They’re eerily similar in terms of artistic design, it’s quite unusual and I don’t expect others outlets to pick up on this. While this is good for the game long term, it also means that a limited amount of assets are available. Because of this, every single location looks exactly the same. You’ll see the same dozen houses in the garden district and the same dozen houses and signs in the cities. They become so unremarkable that you can almost never figure out where you are and frequently need to consult the map to navigate around town. This also applies to the citizens, with the same dozen NPCs littering the locales. It tries to justify this in-game, but nobody is buying it. Not enough models were made.

Also, even on PS4, the framerate takes a pterrible nosedive into the 15 frame zone if there are too many NPCs in view, which happens all the time since there are so many.

In a world where Germany won World War II, the people are now forced to… wait, what? Really? Is this a fad or something? But seriously, despite this being a somewhat common trope, the game manages to veer off into crazy town. This is the game’s greatest strength, its engaging story. You start the game as one Arthur Hastings. He happily works his day job censoring old newspapers when he spots an article about his brother, who was taken away from him (put on a train to Germany). Triggered by this traumatic event, he stops taking his Joy and then gets forced out of the city. Throughout the campaign you work your way through location after location, simply trying to escape Wellington Wells to look for him. Over the course of this story, you will meet very interesting characters, two of which later become playable after his story is finished.

It’s surpisingly enrapturing, constantly making you want to know more and more. It also helps that the game is one of the very few games where they inject humor and it’s actually funny. There’s one mission called “Oh, Behave!” that teaches you how to interact with people and it was enough to make me laugh out loud. It also has a ton of references to many touchstones of British comedy, with gags about the Beatles, Austin Powers, and of course, Monty Python. “Supreme exective power derives from a mandate from the masses…” one of the NPCs will tell you. Conversations with random people are always a series on non-sequitor comments. You’ll eventually hear all of them and get sick of it. In this case, it’s somewhat acceptable because talking to normal NPCs is actually a part of the gameplay mechanics.

Oblivion syndrome in full force here, where you will hear the same voice actor over and over and over again. It was also revealed in a few videos that some characters will actually swap voice actors. Again, considering that it’s a gameplay element with randomized voices for some NPCs, this is just okay. But, at the same time, it’s too often that you’ll hear the same thing repetitively. More random dialog needed to be recorded. As far as the music goes, it’s acceptable but not very audible overall. This is true even when I turned down all the other audio settings to favor the music. It fits the game’s setting, and that’s just it.

OOF. Here’s where the trouble starts. I have an entire list full of gripes I have with this game and don’t know where to start. The combat is trash. First person melee can be difficult and is either becomes enough to work with or flailing mess. This one is the latter. Attacks just don’t seem to connect when you attack them. But your seem to have a hit box that spreasds a couple feet around you. The other main gameplay mechanic revolves entirely on you wearing the correct type of clothing for different locations and some specific costumes for a couple missions. Switching back and forth between your suit and your torn-up suit feels a bit like an unnecessary step. Basically, when you are in the garden (poor) districts, you are allowed to move about all you want but people will become hostile if you go in their homes or steal, which is reasonable.

But when it comes to the cities, it’s extremely strict but also trite. You have to make sure you walk normally, don’t crouch, jump, or sprint, and everyone will leave you alone. But if you’re caught either doing one of these things too often without immediately saying hi to people afterward (seriously), everyone will chase you. But moments later you can add a perk to your abilities section that gets rid of this mechanic. However, you can also be chased for appearing to withdraw from Joy, stealing, or wandering after curfew. During the daytime, this can be really problematic because once you do something wrong, the ENTIRE CITY will aggro and chase you, sceaming that you murdered someone. This isn’t too hard as long as you can find an alley to ditch them in, but it happens enough to become a nuisance more times than a challenge.

Some more nags. The map does erase your custom marker when you arrive at it. Icons on the map for missions and sidequests will also stay on the map screen even after you complete them. Because of the randomization and lack of variety, you also have to consult the map too frequently to figure out where you are. Fast travel is somewhat available but it is largely useless. This is especially poignant when quests put you on missions where you have to go to opposite ends of town, often several times per mission. Which would be fine if the game wasn’t littered with so many fetch quests. The game starts off fine but after a few hours in, you’ll be doing way more fetching than anything else. There’s an ultimate perk in your upgrades that makes you impervious to being dehydrated, hungry, or tired. But it literally does not actually work and it costs the most skill points to purchase.

More? Okay. NPCs will get stuck in one spot in a walking animation, float around, and clip right through the scenery. The game forces you to focus heavily on crafting in its second act. It asks you to craft a lot of things the moment you start the act when you have nothing in your inventory. I had to spend a solid half hour or more trying to find one specific item so I could continue the story. Then, later on, I had to do it again.

MORE? Okay. The Joy mechanic is very unbalanced and frequently leads to the problem of the aforementioned aggro of the entire town. The load times are very long and you can be stopped dead with a loading screen while walking around. Some mechanics force you to just sit and do nothing for several minutes. Oh, and it completely crashes many times too. I had eight crashes during my play time. This leads to another long wait for the game to load and on two occasions it cost me mission progress.

So, yeah. All that above? It doesn’t make the game hard, the game is rather easy on its normal setting. But it is arduous and obnoxious. You are essentially being drip-fed with plot elements followed by 5 minute long jogs around town. This happens too often. The original sense of wonder you get when you start the game diminishes and becomes tiresome. The final straw was during the second act. I was hard-pressed to find crafting elements. And when I did, I had to go back and forth between two locations countless times. After finally collecting an ingredient, the game hit me with yet another 600m trip to the other end of town. Remember, you can’t sprint until you unlock that perk. I had enough after 20 hours of game time. I cut my losses and traded the game in for Xbox bucks.

This game is such a letdown and appears to have been released before it was ready. As stated, the game was delayed several times, and it is very likely that the developers at Compulsion Games were simply told to wrap up production and put the game out. It would also seem that Gearbox may have had a negative impact on their game and made them do far more than what they originally set out to make. If you can tolerate bad gameplay for a good story, that’s your only reason to buy this.